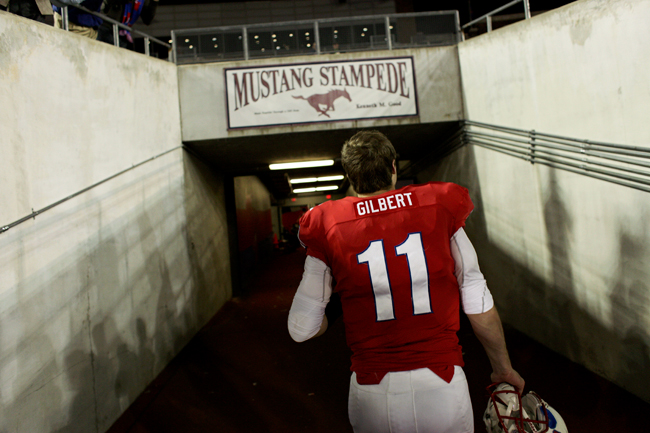 Mustant Quarterback Garrett Gilbert had a solid night Thursday throwing for 265 yards and a career-high four touchdowns. After a rocky start at Texas, the transfer to SMU  has proven to be a refreshing start for the Lake Travis High School graduate.

The last time Garrett Gilbert had this good of a game, he was in high school.

The former Longhorns quarterback looked like the prolific passer he was at Lake Travis High School, throwing for 265 yards and a career-high four touchdowns in SMU’s 72-42 win over Houston Thursday night in what was, by far, his best performance since he decided to transfer from Texas last September.

“The sky’s the limit for us,” Gilbert said. “I still think offensively with us and the playmakers we have and the running back we have in Zach [Line], and the offensive line continues to gel and get better and better each week. Tonight things just went our way.”

He couldn’t remember the last time he threw as many as four touchdowns in a game. It had been a while.

He last accomplished the feat when he was a 17-year-old leading Lake Travis to a 48-23 victory over Longview in the 2008 4A state title game, his 30th straight win as the Cavaliers’ starting quarterback. The game took place in Waco, halfway between where he began his college career and where he’s trying to salvage it.

A two-time state champion at Lake Travis, where he went 39-4 as a starter, Gilbert attracted the attention of many top-notch college football programs. He had his heart set on Texas, where he went 5-7 in his first full season as a starter in 2010. After making two starts in 2011, Gilbert underwent shoulder surgery and transferred to SMU.

“Texas is the biggest and the best,” Gilbert said. “SMU is a program that obviously, in the past, has had some success but has had a little bit of a period of — I don’t know what the word for it is — but a lot of losing. You don’t see 100,000 people in the stands because we only have a 32,000-seat stadium.”

Earlier this year, Gilbert revisited his alma mater at Lake Travis, where he enjoyed the sustained success he hasn’t had in college. Gilbert couldn’t walk through the gates before shaking the hands of dozens of red-and-black-clad Lake Travis faithfuls, smiling the whole time. He seemed comfortable, at home and at ease there at Cavalier Stadium. They love him there.
“It’s a cool place to be, man,” Gilbert said. “We used to not be able to make it past the first round of the playoffs. Now you go into the season, it’s 16-0, state championship or bust.

There’s a lot of high expectations, but that’s what happens with the success.”

If anyone’s familiar with high expectations, it’s Gilbert. He claimed they weren’t too high while he was at Texas, refusing to make excuses for his tumultuous Longhorns career. But after taking 27 hours of classes this spring so he could be immediately eligible at SMU, he brought that career to an end.

“It was tough. I think my grades suffered a little bit,” Gilbert said. “I didn’t do anything. I went to school, I went home and I lifted weights. That’s it. If I would have been doing football stuff and that type of thing, it would have been a little more difficult.”

It wasn’t until 10 months after his surgery to repair a torn labrum in his right shoulder that Gilbert felt fully comfortable throwing a football. But once he was, he didn’t want to stop.

“No one’s really excited about two-a-days, but I was excited to put the shoulder pads on again,” Gilbert said. “I hadn’t played in so long. I was really happy to just be able to go out and compete again.”

Gilbert threw for 286 yards and two touchdowns in his SMU debut but was also picked off twice in a 59-24 loss to Baylor. He took the field with his younger brother, Griffin, for the first time on separate sidelines when TCU beat SMU, 24-16, a few weeks later. The Mustangs have won two of their three games since, improving to 3-4 on the year.

“I’ve been a little conservative with him, trying to guide him along. I just said it’s time to throw it,” SMU head coach June Jones said after the Mustangs’ win over Houston. “I tried to be a little more aggressive for him and let him throw it down the field. I’m glad he saw some of the things he saw and executed the throws.”

Gilbert stays in touch with his former Texas teammates and even reaches out to his former high school coach, Chad Morris, from time to time. Morris now serves as Clemson University’s offensive coordinator and is the nation’s highest-paid assistant coach.

“He’s the best coach I’ve ever been around,” Gilbert said. “Coach Morris deserves everything he’s gotten. You don’t see meteroic rises like that from a state high school coach to the highest-paid offensive coordinator in the nation. It’s unbelievable.”

The meteroic rise that many have waited for Gilbert to have has not happened yet. It may never come. Recapturing the magic he created in high school is much easier said than done. But, for a brief moment Thursday, that magic returned.