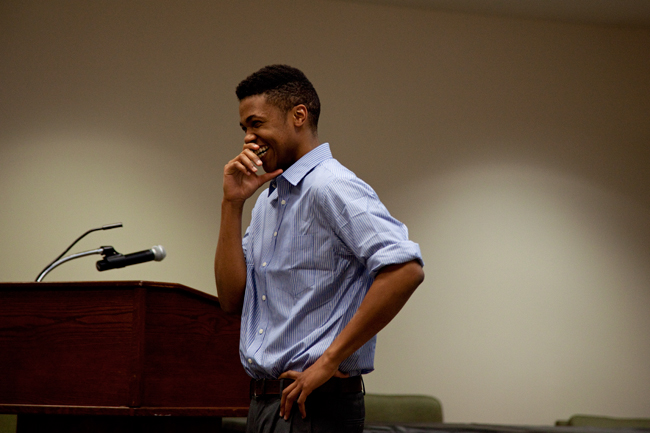 Kye Allums, a transgender man, speaks about his transition from a woman to a man and experience as a former NCAA athlete during the Gender & Sexuality Center Speaker Series Thursday in Gregory Gym.  " />

Kye Allums, a transgender man, speaks about his transition from a woman to a man and experience as a former NCAA athlete during the Gender & Sexuality Center Speaker Series Thursday in Gregory Gym.

Former NCAA athlete Kye Allums may have received support from his coaches and teammates when he came out as a transgender man, but his journey in finding himself did not always attract positive attention.

Allums presented “The Transition Tour” through the Gender & Sexuality Center Speaker Series Thursday in Gregory Gym in an effort to fight ignorance and discrimination associated with transgenders by discussing the differences between gender expression, gender identity and sexual orientation. Allums discussed his transition from a woman to a man.

“Sex is what you have, gender is how you feel,” Allums said. “No one else should tell you how to express your gender. It is not a choice. It is a feeling.”

Allums attended Centennial High School in Circle Pines, Minn. At this time he was known by his original name, Kay-Kay. His mother raised him as a Jehovah’s witness. When he told her he was gay, Allums said she quoted Bible scriptures at him.

“The next day I woke up, and she took me to the hospital to get a drug test,” Allums said. “She then took me to a church and made me sign a contract afterward promising to pray more. Our relationship was never the same.”

Allums attended George Washington University after graduation to play women’s basketball. Allums received support from his coaches and teammates after coming out as a transgender man.

“I wanted to continue to play with my team,” Allums said. “I wanted to finish playing when my teammates finished playing. I did not want to undergo hormones and be forced to play for a different team. If you cannot beat me, then it’s because you suck, not because of any hormones.”

Electrical engineering sophomore Joshua Bryant attended the lecture. He said being a student is stressful enough without fear of discrimination.

“We need to make every student feel safer in the learning environment,” Bryant said. “There does not need to be any added pressure.”

Ixchel Rosal, director of the Division of Diversity & Community Engagement, said UT has made great strides to help with the overall comfort of transgender students.

“Gender identity and gender expression have been included in the anti-discrimination policy, which is huge,” Rosal said. “There has also been an effort to create more gender-neutral restrooms on campus as well as the preferred name policy, which allows students to establish a preferred name in the classroom.”

Students can access more information about transgenderism at the Gender and Sexuality Center.