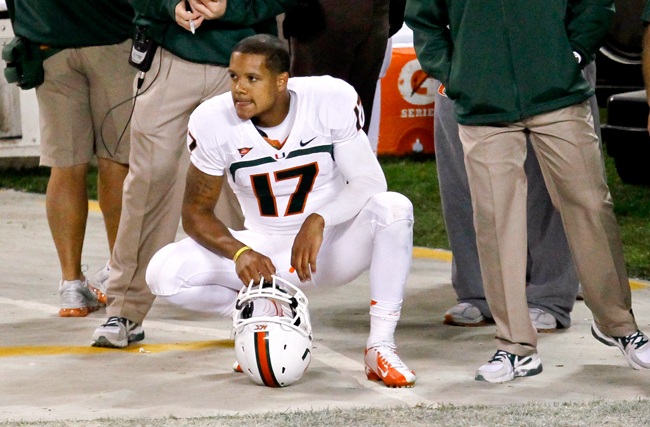 With the return of Notre Dame to national acclaim, to Oregon State sitting pretty at No. 8 in the polls, the final six games of the college football season shouldn’t disappoint. Let’s take a look at some of the national notes heading into the weekend.

• South Carolina junior running back Marcus Lattimore is questionable for the Gamecocks’ matchup with Florida this weekend with a bruised hip. Lattimore has historically been injury prone, tearing a ligament in his knee in 2011, which held him out the final six games of the season. Lattimore has 584 rushing yards and 10 touchdowns on the season.

• Former Louisiana State cornerback Tyrann Mathieu might be in trouble with the NCAA again after allegedly promoting a party at a Baton Rouge nightclub while he was still a member of the football team, according to a report by Sports Illustrated. Mathieu was kicked out of the Tigers’ football program before the season began after failing multiple drug tests.

• Miami is holding out hope that junior quarterback Stephen Morris will be ready to go this weekend when the Hurricanes host Florida State. Morris is nursing a sprained ankle suffered in an 18-14 loss versus North Carolina. Morris has thrown for 1,991 yards and nine touchdowns this season, including a Miami and Atlantic Coastal Conference record 551 yards versus North Carolina State.

• Northwestern will take a team nap prior to its 2:30 p.m. kickoff versus Nebraska this weekend. The Wildcats struggled in a 2:30 p.m. game against Boston College a few weeks ago and when head coach Pat Fitzgerald asked his leadership council what the issue was, the unanimous answer was tiredness. According to the team itinerary the nap will happen at about 9:30 a.m. and is mandatory.

• Dartmouth had to use a water bottle as a kicking tee versus Yale a couple of weekends ago. The Big Green asked the Bulldogs’ equipment manager to borrow a tee prior to the game, but just before kickoff Yale head coach Tony Reno walked over to the Dartmouth sideline to ask for the tee back.

• Idaho State head coach Mike Kramer may be in a bit of legal trouble after a video of him pushing wide receiver Derek Graves in practice surfaced on the internet. Kramer allegedly became enraged when Graves waved off a corner in practice in favor of a more experienced player to cover him. The University and the police are investigating whether Kramer’s actions will be considered criminal behavior.

• After breaking his neck in a game against Tulsa last month, Tulane senior safety Devon Walker has issued his first statement, thanking everyone for their overwhelming support. Walker has been in a rehabilitation center since Sept. 18 after undergoing a three-hour surgery to stabilize his spine and neck. Walker’s injury fuels the ongoing debate as to whether football is becoming too dangerous.