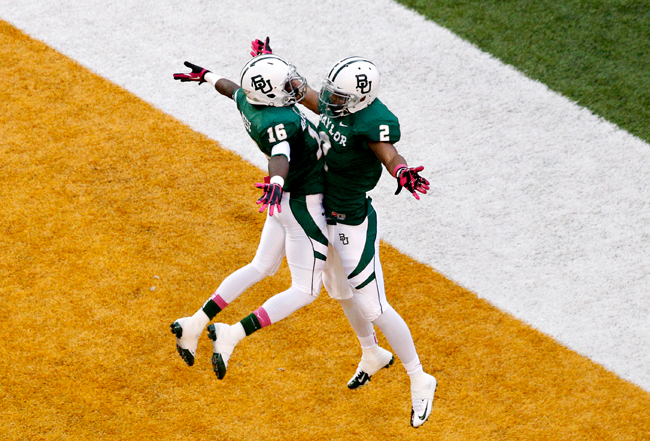 Baylor wide receivers Tevin Reese (16) and Terrance Williams (2) celebrate in the end zone following Williams' touchdown reception in the first half of the game against TCU Saturday, Oct. 13 in Waco, Texas.

After former TCU quarterback Casey Pachall withdrew from the University last week, Baylor fans were already putting a check in the win column for the Bears.

But four interceptions and a pair of fumbles later, it was obvious things weren’t going as planned.

A win looked promising after a long touchdown pass from senior quarterback Nick Florence to senior wide receiver Terrance Williams 26 seconds into the game, but a lack of rhythm offensively and a need for defensive stops allowed TCU to carry the game away.

After the game junior nickelback Ahmad Dixon was asked what the defense was going to do in practice to prepare for Saturday’s matchup against Texas.

“We’re just going to go back to the basics,” said Dixon.

His response was met by a firm question from the media, “Wasn’t that what you did on the bye week?”

True, that’s what we had heard the team was doing but it didn’t turn out quite right.

With Baylor’s conference slate well underway, a loss like that was enough to set a spark under the Bears toward a better outcome at Texas.

This matchup has been a toss-up ever since the beginning of the season: both teams have things to prove offensively and teams to stop defensively.

While Texas wins the defensive battle on paper, Baylor wins on the offensive side.

Even after an uncharacteristic four interceptions last weekend, Florence leads the nation in total offense with 404.4 yards per game and ranks No. 2 nationally in passing yards per game (374.8) and quarterback rating (176.6).

“The thing we have to remember about Nick [Florence] is that he really hasn’t played that many football games,” Briles said. “We look at him like he is a really experienced quarterback, but his actual game-time experience is not that much.”

Williams leads the nation with 166 receiving yards per game.

The ground game for Baylor features senior running back Jarred Salubi, who could put up big numbers while facing a Texas defense that has struggled to defend the run. Texas has allowed 209.17 rushing yards per game, 103rd in the nation in that category.

One prominent statistic to Baylor’s wins and losses so far this season is the turnover margin.

During the team’s three-game win streak to open the season, Baylor’s defense forced 10 takeaways and lost only four turnovers, a plus-1.5 per-game margin.

However, during the past two games the Bears haven’t forced any takeaways and have lost seven turnovers, a negative-3.5 per-game margin.

Defensively, Baylor is dead last in the NCAA FBS, allowing 558.8 yards per game.

In order for the Bears to win this ball game, they must win the turnover battle.

When that happens, Florence and the offense find a rhythm that puts points on the board and keeps the defense on the sideline for a little while longer.