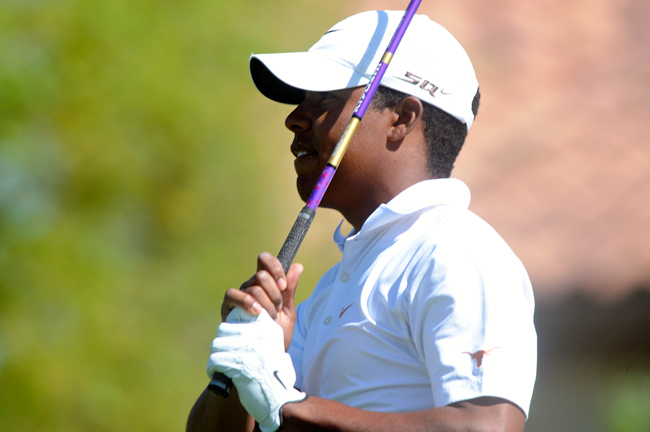 Julio Vegas followed his brother to Texas and is now the only senior on this year’s squad and one of five retuners from last year’s championship team. Vegas helped lead Texas to a national title this past summer and is looking for another one.  " />

Julio Vegas followed his brother to Texas and is now the only senior on this year’s squad and one of five retuners from last year’s championship team. Vegas helped lead Texas to a national title this past summer and is looking for another one.

Julio Vegas has experienced just about everything during his career with the Texas Longhorns.

Currently in the midst of his fifth season, Vegas has competed in his fair share of regular and postseason golf tournaments, and he has been with Texas long enough to witness the Longhorns jump from an average team to collegiate champions. He is the lone senior on this year’s roster, and his experience, dependable play and remarkable work ethic have allowed him to emerge as one of the Longhorns’ primary leaders.

“One of the main things about this team is that everybody is able to play,” Vegas said. “I just focus on myself and show my teammates how to work hard and how to behave on and off the field. I try to lead by example.”

Vegas grew up in Venezuela and joined the Longhorns in 2008, following in the footsteps of his brother, Jhonattan, who played at Texas from 2004 through 2007. After redshirting his first year and not playing in his freshman season, Vegas made his debut with the Longhorns as a sophomore in 2010 at the PING Preview and became a regular contributor from then on.

Vegas enjoyed a breakout year as a junior in 2011-2012, competing in nearly all of the Longhorns’ events and becoming one of the team’s most consistent and productive players. He recorded an average score of 72.07 per round in 13 tournaments, good for third on the team, and logged his first career event victory at the Morris Williams Intercollegiate. Overall Vegas registered six top 10 finishes last season and was named to the All-Big 12 Team and Golfweek All-American Second Team.

While Vegas’ strides on the golf course were a significant contribution to the Longhorns’ title run last season, the Texas coaching staff believes his devotion to working hard and his hunger for success are what separate the senior from other players.

“Julio is a very special guy as far as players go,” head coach John Fields said. “His work ethic is outstanding, and his confidence is remarkable. He just has such a large desire to be successful, and he is extremely directed toward that in whatever he is doing. A lot of people talk about giving their absolute best, but they’re really only giving 30 or 40 percent. Julio gives the absolute.”

The Texas golfers agree with this and believe that Vegas’ drive makes him a good role model and a strong teammate.

“It’s his last year. We know he wants to make it special, and we want to make it special for him,” junior Toni Hakula said. “You can see it in his demeanor. He is a really hard worker, and he definitely brings something special to the team.”

Vegas credits much of his success in golf to his brother, who is currently competing in the PGA Tour. He believes that Jhonattan Vegas set a strong example in preparing for tournaments through hard work and devotion, and his brother’s glowing reports about Texas were a large part of Vegas’ decision to play here.

“Every time he came back to Venezuela, he told me about Austin and the awesome people and coaches, and that’s a big reason why I came,” Vegas said. “I don’t regret it. It’s been a great experience, and hopefully there will be more great experiences this year.”

At the conclusion of this season, Vegas hopes to follow his brother’s lead once again and play golf professionally. For now, though, the senior is narrowing his focus to this season, seeking to win another title with the Longhorns.

“Our goal is to win another championship,” Vegas said. “After school I’ll try to play pro golf. I’m not sure when it will happen, but I’m putting all of my focus on this year because I’m not sure of what’s in the future.”

The future seems bright for Vegas no matter where he ends up, and this season he could very well end up being the key to another Longhorns title run.