Texas leading Baylor at half 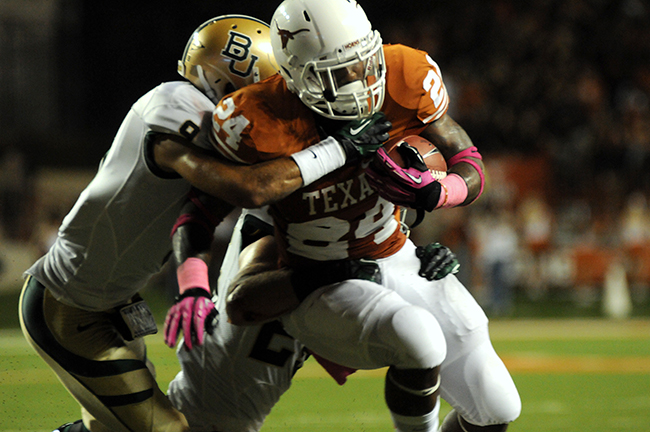 It was clear that this match up was going to be high scoring from the start.

Texas freshman Daje Johnson ran the ball 84-yards for a touchdown on the first play of the game.

The Bears tied the game after a gift from the Longhorns.  Kyle Ashby’s snap went over the head of Alex king and gave Nick Florence and the Bears the ball at the Texas eight-yard line.  Florence ran it in for a touchdown.

The Texas offense pounded the Baylor defense in its third possession and a 15-yard touchdown run by Joe Bergeron gave the Longhorns the lead.

Penalties by Quandre Diggs and Kendall Thompson helped the Bears along in their game tying drive.  Glasco Martin made it 14-all with a 2-yard touchdown run.

Terrance Williams beat Diggs and he took full advantage of it.  He scored on an 80-yard touchdown pass from Florence, making the score 21-14 and giving the Bears their first lead of the game.

Bergeron scored his second touchdown to tie the game with a 2-yard run.

Florence found Lanear Sampson for a 7-yard touchdown to give the Bears the lead.  D.J. took the kickoff return 70-yards.  With the help of advantageous field position, Bergeron scored a 9-yard touchdown run to tie the game.

An interception by Texas’ Josh Turner gave the Longhorns the ball at their own 37.  On third and seven, Mike Davis made up for a dropped pass in the first quarter and caught a 35-yard pass.

The Bears finished off scoring in the half with a 29-yard field goal to make the score 42-31 in favor of Texas at the half.