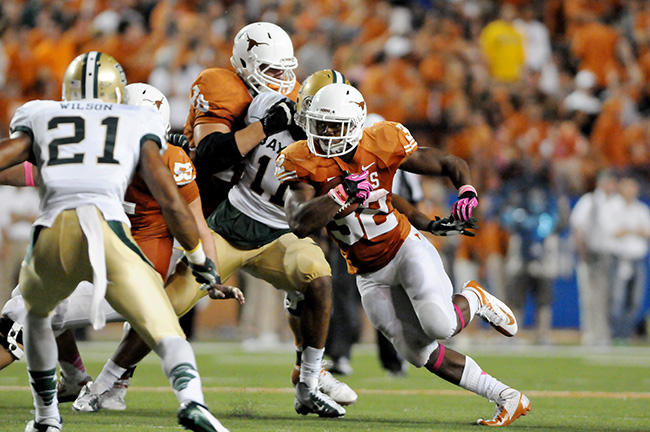 Texas running back Johnathan Gray makes his way down the field during the game against Baylor.

The Longhorn defense wasn’t elite, good or even average, but the highly criticized group played well enough down the stretch to propel Texas to a victory.

Texas’ defense was pounded – again – for 607 yards, and, at times, looked as inept as the numbers show. However, a pair of huge turnovers plus a few timely stops allowed the Longhorns to edge out Baylor and their No. 1 ranked offense.

“We knew going into the game that they were going to make plays, so we looked at it as a game of stops,” defensive coordinator Manny Diaz said. “The two turnovers and holding them to three field goals were just crucial.”

The biggest momentum swing of the contest for the defense came with a few seconds remaining in the third quarter. The Longhorns were up by only three after a three-and-out – a tough scenario in a game that was based on score-for-score jabs – and the Bears were driving into Texas territory.

But it was at that moment in which a pair of sophomore’s made an upperclassmen level play. Baylor called a dive up the middle for Glasco Martin, and when he hit the hole, Steve Edmond was there to meet him. The pair clashed in the gap and Edmond knocked the ball away.

“I put my head on the ball and it popped out,” Edmond said. “I didn’t even know I made him fumble. Everybody just started screaming, I was like ‘what is going on?’ until I saw the replay.”

Edmond didn’t know, but newly-minted starter Mykkele Thompson was there to pounce on it. The turnover gave Texas premium field position in Baylor territory, and the Longhorns bounded their way down the hash marks for what turned out to be the game-winning Mike Davis touchdown catch.

The defense wasn’t done at that point, however. The group hung on during the fourth quarter and held Baylor’s explosive group to seven points, including a huge stop the possession after Davis’ score.

It was a bend-but-not-break performance at its finest. The Longhorns gave up 600 yards of offense for the second game in a row, but for this struggling unit, stats aren’t the foremost thought.

“We have faced some of the some of the top offenses in the nation, so these guys are going to put up stats,” cornerback Carrington Byndom said. “The main thing for us is to limit as much as we can, but then again, at the end of the day, all it comes down to is if we win.”

The defense did just enough, but the offense was brilliant after a putrid performance the week prior to Oklahoma. David Ash played turnover-free and the running game punished the Baylor front seven on the ground.

Most of the pounding came from Texas 6’1”, 230-pound bruiser, Joe Bergeron. The sophomore back was nearly impossible to tackle in his 117-yard outburst and could not be slowed down near the goal line, as he bowled through people en-route to five touchdowns.

“I see the crease, I see the touchdown, I see the goal line, and that is really it,” Bergeron said. I just hit it. Really, it’s just a blur. If anybody else comes within that vision you just punish them. That’s what you do on goal lines.”

Bergeron provided most of the fireworks for the Texas offense, but the first play from scrimmage created the spark for Texas’ 56-point outburst.

The Longhorns, for the first time all season, choose to receive the opening kickoff instead of sending their defense out first, and it paid dividends. Co-offensive coordinator called a play for electric freshman Daje Johnson, and he made the most of it.

Johnson burst through the hole on the right side and from there his sprinter-like speed took over. Johnson ran untouched up the sideline for the 84-yard touchdown, and even had time to turn around and take in the scenery – the pursuit was that far behind.

“Once he [Johnson] gets in the open field, he is capable of doing great things for us and the play was huge,” Harsin said. “We wanted to start fast. We took the ball and wanted to get out there, and to get a score was huge.”