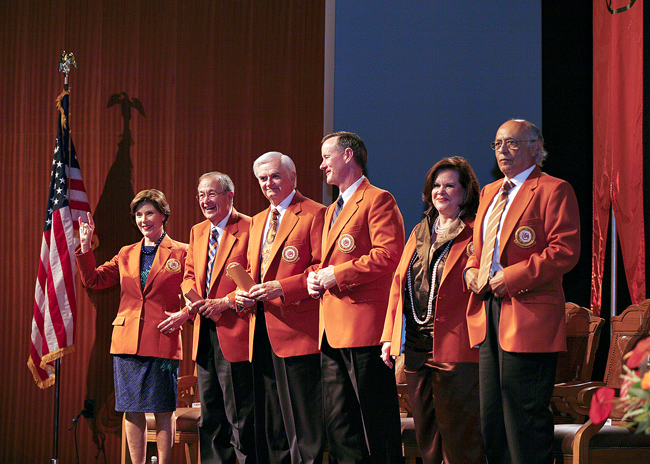 Six of UT’s most distinguished alumni, including former first lady Laura Bush and Adm. William McRaven, traveled to campus Friday to be honored for their accomplishments.

For more than 50 years, Texas Exes, the University’s alumni organization, has annually honored as many as six UT alumni who have distinguished themselves professionally and through service to UT with a Distinguished Alumnus Award. This year, the organization recognized Laura Bush, former first lady and 1973 alumna; Julius Glickman, philanthropist, attorney and 1962 alumnus; Charles Matthews, former vice president and general counsel of Exxon Mobil Corporation and 1967 alumnus; Adm. William McRaven, commander of NATO Special Operations Command, leader of the military operation that resulted in the death of Osama bin Laden and 1977 UT alumnus; Melinda Perrin, former chair of the Hermann Hospital Board of Trustees and 1969 UT alumna; and Hector de Jesus Ruiz, CEO of Bull Ventures, an education advocate who has served on the President’s Council of Advisors on Science and Technology and the Texas Higher Education Coordinating Board and 1970 UT alumnus.

All six members were in attendance at the ceremony, along with some of UT’s most prominent figures and former Distinguished Alumnus Award winners.

UT President William Powers Jr. kicked off the ceremony by welcoming each award winner and talking about their impressive accomplishments.

“We’re just happy that we can say we knew them back when, and we are even more happy that we still know them today,” Powers said.

Each recipient gave a speech after accepting their orange blazer, a symbol of the award given to each of its recipients.

Bush talked about her time at UT in 1972, while working on her masters degree in information sciences. She said Austin was an impressive and welcoming place, even back then.

“I felt right at home, even though I was not really hippie material,” she said. “Case in point, I was a librarian who named her cat Dewey after the Dewey Decimal System.”

Perrin and Glickman chose to use part of their speeches to comment on the current debate over funding going on at UT.

Glickman said when he came to UT in the 1950s the state paid for 69 percent of the cost of his education. He said they now pay only an average 13 percent of a UT’s undergraduate’s education cost.

Both commented on UT’s need for additional funds in order to keep up its tradition of excellence.

“To prevail will require our united, passionate, engaged advocacy,” Perrin said. “Together we can help the University of Texas become the best public university in America.”

The crowd roared especially loud when McRaven accepted his award. McRaven organized and executed Operation Neptune Spear in 2011, the military operation that resulted in the death of Osama bin Laden.

In his speech, McRaven talked about the tools that UT gave him, and the way he was able to go on and experience great success, despite his low GPA.

“The school taught me that failure was only a temporary condition,” McRaven said, citing his poor performance in UT classes.

“For those professors out there who come across a struggling student, I would ask you to give them a break and never forget that great institutions like the University of Texas can take a common student and give them the tools they need to have uncommon success,” McRaven said.