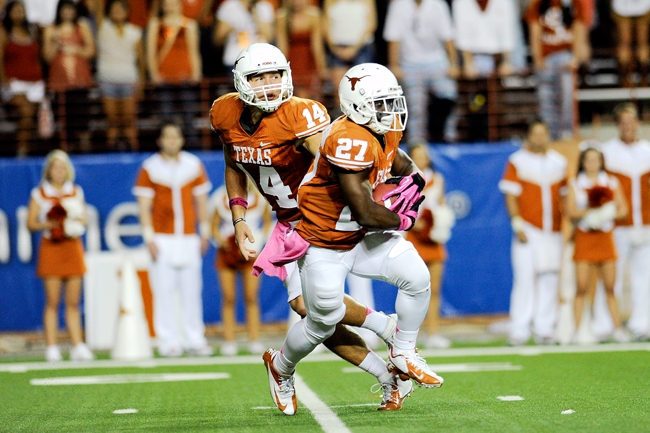 Freshman Daje Johnson rushes against Baylor on Saturday. Johnson logged 102 yards and one touchdown against the Bears.

Forget what you heard about Texas being a defense-minded, run-first, SEC-style team.

All the preseason hoopla pegged the Longhorns as a team that would lean on their defense, wait patiently for their passing game to progress as the running attack carried the offense. But they need to embrace their identity as just another Big 12 team where defense is an afterthought and 50 points occasionally won’t be enough to win.

It took 56 points for Texas to improve to 5-2 this weekend as the Longhorns beat the Bears, 56-50, no thanks to a defense that gave up 607 yards and is in the midst of its worst five-game stretch in school history. Missed tackles and the lack of a decent run defense are still problems. At this point, there’s no reason to expect they’ll be fixed this year.

But the Longhorns offense made sure it didn’t matter. The only thing that may have looked better was Natalie Portman. And she looked as shocked to be on the Godzillatron as Texas’ defense did when a ballcarrier approached.

“We’ve leaned on the defense for the last two years when the offense has struggled,” head coach Mack Brown said. “I thought we grew up some tonight. We did better. We didn’t panic. We didn’t get down. I thought the young linebackers did stop the run better tonight than we’d done. Still didn’t stop it great, obviously. But it was better.”

But Mack Brown and his team have now realized the benefits of a fast start. After years of deferring to the second half when they win the coin toss, the Longhorns elected to receive to start the game — and it paid off.

Even the way they took a 7-0 lead was uncharacteristic. With Malcolm Brown out with an ankle injury and Joe Bergeron listed at the top of the depth chart, it was true freshman Daje Johnson that got the game’s first carry. He made the most of it, taking it 84 yards for a touchdown on the first play from scrimmage.

“That first play was awesome,” sophomore quarterback David Ash said. “Any doubt that was in our minds was gone at that moment when we showed that we could get in the end zone again. We can play football. We can win.”

And win Texas did. Limited by both a broken left wrist and agonizingly conservative playcalling, Ash made the most of the situation and managed to throw for 274 yards and a fourth-quarter touchdown to Mike Davis. Most importantly, and unlike last week, he didn’t commit a turnover.

This year’s Longhorn defense could go down as, statistically, the worst in the storied program’s history. It will need to improve if Texas wants to beat the Texas Tech’s and Kansas State’s of the world.

But it’s Texas’ offense that will clearly do the heavy lifting this year.