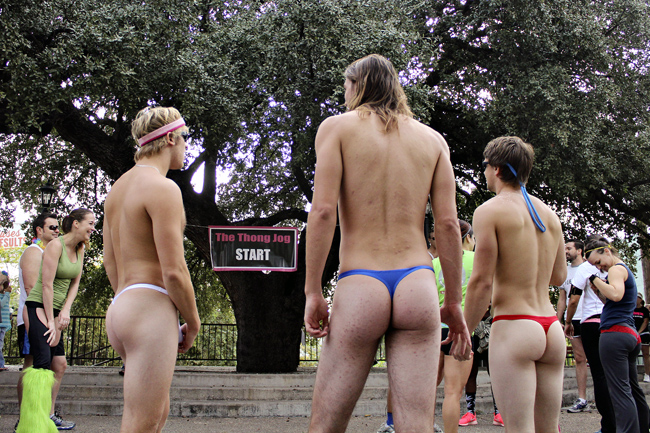 Three men gather at the starting point for the Austin Thong Jog Saturday morning. The event was in commemoration to Leslie Cochran, and proceeds went to support services for Austin’s Homeless.

Thong-clad Austin joggers filled the streets of downtown Austin Saturday in efforts to raise proceeds for the homeless and in memory of the Austin icon Leslie Cochran, a homeless man who died in March.

More than 150 people registered for the one mile and 5k routes to raise proceeds for Mobile Loaves & Fishes, a social outreach ministry that provides supportive items such as food and clothing to the homeless.

Cochran, who arrived in Austin in 1996, usually wore a thong while advocating for peace and against police brutality against the homeless. Many considered him the face of Austin’s homeless community.

Austin city officials estimate that more than 2,300 homeless people lived in the city in 2011.

Baldwin said he worked with Henry to create a fun event to honor Cochran’s positive impact on Austin residents.

“Everybody really enjoyed him in Austin,” Baldwin said. “Everybody sees him in a positive way. He influenced corporate people, college students, anybody visiting from out of town and specifically me and Sara to do this. It is important to keep his memory alive.”

Cochran ran for Austin mayor three times, most recently in 2003. In 2009, Cochran was attacked and suffered a head injury. It is believed he died because of complications from the injury last year.

James Sutton, chemical engineering freshman and race participant, said the race was a way to get involved in the community and work with charity.

“It is just people having a good time, with no alterior motives,” Sutton said. “People are just trying to help out and have fun while doing that.”

Race coordinator Henry said Cochran represented a sense of adventure for those in Austin whose lives forced them to solely focus on work. She said she and Baldwin hope to make the race an annual event.

“He had a good heart, and his ‘screw the man,’ anti-establishment mentality made him loved,” Henry said. “He went against the grain, and many of us that work in cubicles and hate our lives looked up to that.”

Printed on Monday, October 22, 2012 as: Run and bare it: Downtown Thong Jog in icon's honor supplies homeless with food, clothing