UT artists portray the violence along the US-Mexico border 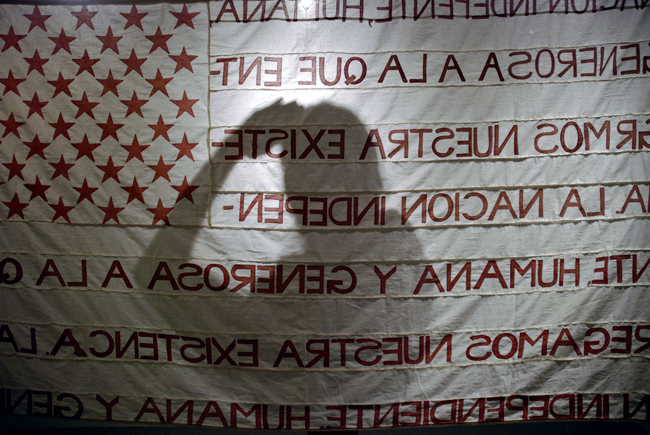 A Nation of Fear is on view at the Visual Arts Center through November 10. (Photo courtesy of the artist)

Capturing the violence and destruction of the drug war on the US-Mexico border, “A Nation of Fear” seeks to inspire thought. Coordinated by UT student art group Center Space Project, the exhibit features the work of three Mexican-American artists Miguel Aragón, Adriana Corral and Raymundo Delgadillo. Rather than focusing on the shock value of the violence, the artists subtly convey the gravity of the violence in Mexico.

With nearly 50,000 victims, the drug war along the border continues to escalate. Using the idea of human remains to represent the victims lost, the artists subtly draw attention to the impact the drug war has on the people of both nations.

Corral transferred the printed names of murdered victims from papers to the wall and burned the remaining paper. The ashes are arranged in a rectangle that represents the standard burial plot of a victim. Delgadillo created serigraphs of different drugs using animal blood to represent the blood lost in the drug war.

“I started working with blood because it was very raw, but I wasn’t interested in using it for shock factor,” Delgadillo, the coordinator of the exhibit and featured artist, said. “I wanted people to think about what blood really meant. It’s when someone is damaged, when someone is wounded.”

Born in areas now plagued by crime and drug traffic, the artists explored the way the crimes of the cartels have changed their homeland. Delgadillo has seen his once peaceful childhood neighborhood in San Louis Potosi torn apart by the violence.

“The city that I am from used to be very peaceful, and every time I talk to my family they tell me about more shootings and narco messages delivered close to the areas they live,” Delgadillo said. “It used to be a really peaceful city, so to see that years later is very shocking.”

The Mexican media is dominated by graphic scenes of mutilated bodies, drug crimes and narco mensajes. Attempting to bridge the divide between the U.S. and Mexico, the artists beautifully recreate and incorporate scenes of death and destruction into their pieces. The works themselves are very quiet, but they represent a much more powerful and emotional subject.

The opening of the exhibit on Friday featured a panel of experts that contextualized the violence portrayed in Chicano culture and art.

“All the works in the exhibition have so many layers for interpretation, so the panelists gave really good insight into how the social issues — cartels, drugs, immigration — are involved,” Luis Vargas-Santiago, Ph.D. candidate in art history at UT and the panel’s moderator, said. “But they also gave insight about the materials. I think it served to put those in context.”

The panel explained how the exhibit features a new genre of art referred to as border art. This genre combines elements of both U.S. and Mexican culture to portray the attitude of those caught in the crossfire.

“The aesthetic of this border art is very violent,” Vargas-Santiago explained. “The pieces in the exhibition describe this violence through subtle and sometimes minimal strategies. The way they treat it is very conceptual.”

The exhibit uses the conventional beauty of the art to explore the atrocities of the drug war. The work itself is simple, and often the explanation of the piece can only be found in the label.

“It’s quiet. The work is interesting because it’s addressing violence, horrendous acts of violence. It’s dealing with the media portrayal of this violence in Mexico,” Maia Schall, president of the Center Space Project, explained. “So all these issues are very tough issues, but the work is extremely delicate and detailed. Its an interesting contrast — to be talking about violent issues with a quiet voice, a somber and poignant voice.”

Hoping to inform fellow students and Austin community members, “A Nation of Fear” uses the powerful images of those affected by the drug war to portray the reality of the border.

“I want it to be evocative instead of provocative,” Delgadillo said. “I want people to think about it, not to be shocked.”