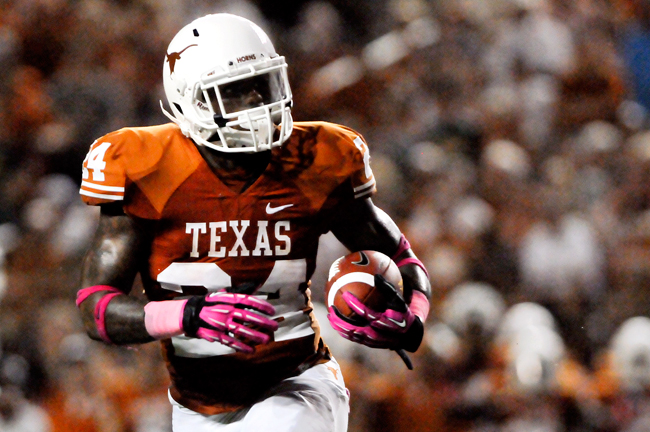 Running back Joe Bergeron has been Texas’ most effective weapon in the red zone this season. He has already scored 14 touchdowns and rushed for 418 yards through six games.

“I see the crease. I see the touchdown. I see the goal line, and that is really it,” Bergeron said. “I just hit it. Really, it is just a blur.”

He said if anyone comes in his vision, he punishes them. Watch any of Bergeron’s touchdowns this season and it’s clear he is powerful, and he certainly isn’t afraid to get opponents out of the way.

Last year, he had five rushing touchdowns. That tied him for ninth for most by a freshman in school history. During Texas’ fourth game this season he tied that number. He now has 14 on the season. Ten of those touchdowns were runs less than five yards.

Bergeron doesn’t mind being called the short-yardage guy. Scoring five touchdowns in one game probably makes it a little easier to cope with that characterization. Against Baylor on Saturday, he finished one touchdown short of tying Heisman Trophy-winning running back Ricky Williams’ record of six touchdowns in one game.

When the offense puts Bergeron close to the goal line, he’s going to get it in. He said scoring in those situations needs to be a guarantee.

“A lot of people have congratulated me on getting four touchdowns, but it was just me playing ball, really,” Bergeron said after the Longhorns’ loss to West Virginia. “If you put the ball on the one, it is a gimme — we are going to pound it in there.”

He has been pounding it in there all season long. He is tied for third in the FBS with 84 points scored this season.

Running back Malcolm Brown’s ankle injury during the Oklahoma State game has kept him off the field. But Bergeron and freshman Johnathan Gray have been keeping the backfield productive in Brown’s absence.

Bergeron’s performance on and off the field inspires players. He is a fun guy who is known for working hard in practice. Bergeron calls the Oklahoma game “a wake-up call.” During the practices following that game, he and other members of the offense pushed themselves even harder than usual and stayed after practice to get extra reps in.

“This was a great week of prep,” co-offensive coordinator Bryan Harsin said. “Just their attitudes, mentality and the whole approach they took, which I believe is key to showing up Saturday and playing well. And you know, Joe has shown that. He really showed that this week in practice.”

Bergeron is a selfless player. Even though it seems that he is hogging all of the rushing touchdowns (Gray got his first touchdown Saturday), he is ready to step up when he needs to and is always prepared for the calls his coaches make.

Although most of his touchdowns have been on short-yard situations, he doesn’t allow himself to specialize.

"You cannot get in that mindset that, ‘I am better than this’ or ‘I am better than that.’ It is contagious and you are just going to bring down the rest of the team and everybody else will be like, ‘Well I shouldn’t be doing this’ or ‘I shouldn’t be doing that.’ Whatever your role on the team is, you roll with that and you help your team win," Bergeron said.