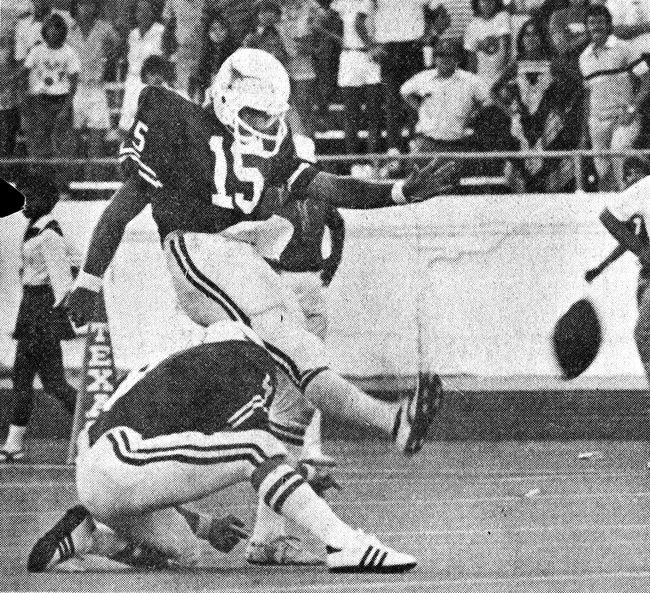 A 1970s UT football star is once again in legal trouble after an Austin resident filed suit against him for fraud earlier this month.

According to the suit, plantiff Matthew Hand loaned $40,000 to each of two men: Russell Erxleben, who was a kicker/punter for UT in the ‘70s, and co-defendant Fred Gladle. According to the suit, Erxleben and Gladle promised to repay the loan and issue bonds valued at $350,000 to Hand after a one-month period. The defendants promised the value of the bonds was a “stipulated US Court value,” despite the fact that no U.S. court had set the bonds at that value, according to the suit. The bonds were never delivered, the suit claims. Both men’s wives are listed in the suit as beneficiary defendents because the suit claims they benefited from the fraud with the knowledge it occurred.

The suit alleges Erxleben, Gladle and their wives led an extravagant lifestyle of houses, cars, clothes and a skybox at the Darrell K Royal-Texas Memorial Stadium. Erxleben had been under investigation since at least 2008 for trying to sell gold-bearer bonds at misrepresented values and quantities. Boxes of Erxleben’s documents were taken as part of this investigation, according to the Austin American-Statesman.

Erxleben served a prison sentence from 2000 to 2005 and was fined millions in monetary restitution after misrepresenting the performance of Austin Forex International, his former currency trading company. The company’s failure cost approximately 800 investors a total of $50 million, according to the Philadelphia Inquirer. More recently, Erxleben was sued for breach of contract by Associated Drilling Company after failing to pay $20,675 for a well installed at his house in Dripping Springs.

Gladle and his wife have not been previously charged with fraud. The couple was involved in foreclosure proceedings against their Austin residence, finalized in Oct. 2005.

Erxleben played for the UT football team in the late ‘70s and is the only three-time All-American punter in NCAA history. After his time at UT, Erxleben was drafted by the New Orleans Saints, but only played for one year.

Locke Lord Bissell & Liddell LLP, a law firm that previously represented Erxleben, said it was not representing him in this case. Terry W. Yates & Associates, another law firm that previously represented Erxleben, could not be reached for comment by press time. The Cagle Law Firm, P.C., which represents Hand, also could not be reached by press time.