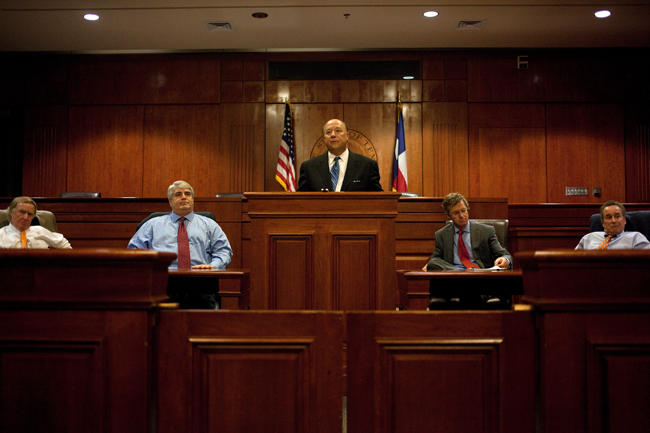 The legal team behind Lance Amstrong, who is under heavy criticism due to doping charges, expressed in a panel Tuesday that a U.S. Anti-Doping Agency investigation involving Armstrong was unjust.

Members of Armstrong’s legal team and sports reporters discussed his case in relation to anti-doping codes and the Court of Arbitration for Sport, which allows athletes to fight accusations, during a panel held in the Lyndon B. Johnson School of Law Tuesday. The anti-doping agency released evidence against Armstrong Oct. 10 in connection to illegal doping during his professional racing career. Doping charges are made after the presence of prohibited substances found in an athlete’s urine or blood tests are proved.

The legal team said the agency’s investigation was unfair from the beginning. Tim Herman, one of Armstrong’s lawyers, said athletes cannot truly pursue arbitration under the current system because the anti-doping agency controls the process.

“It’s rigged,” Herman said. “There are serious deficiencies in the USADA process. They have the authority, the power to strip someone of their livelihood. There are not procedural safeguards, and they do not offer you due process in their disciplinary proceedings.”

Michael Cramer, director of UT’s Texas Program in Sports and Media, said from a legal standpoint there are questions about the process’ legitimacy.

“We have this nongovernmental, nonjudicial body that is sort of a governing arm,” Cramer said. “The legal investigation is gone. There is a nonlegal investigation, without anything to comment on whether it is true or not.”

Bryan Daly, a member of Armstrong’s legal team, said the possibility of a cycling doping case reaching the federal courts is a misuse of resources and priorities because athletic doping cases are not as prevelant as other cases heard in federal court. The federal court case against Armstrong was actually dropped. He said the anti-doping agency has unfairly been after Armstrong for more than a decade.

“Taking Lance Armstrong down either in the media or in a USADA report is not the same thing as a trial,” Daly said.

The panelists outside the legal team said USADA and the media are not to blame for Armstrong’s negative press. ESPN reporter Mark Fainaru-Wada said because athletes commit to certain guidelines, they should be held accountable for their actions.

“The last thing I want to do is be defensive of USADA, but this is the process the athletes themselves agree to,” Fainaru-Wada said. “This is the process that none of them have argued with or fought to overcome. They still have the recourse to fight the case. I never understand the argument that it’s about [the USADA process], let alone that USADA was on some witch hunt for Lance as opposed to anybody else.”