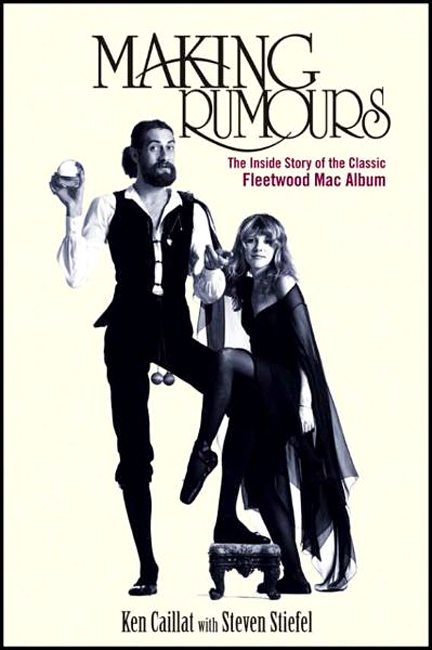 “Making Rumours” follows Caillat, a music engineer and producer, as he worked on Rumours, the Grammy award-winning 1977 album that catapulted Fleetwood Mac to fame. The book chronicles the British band’s sudden rise to fame in America throughout the year 1976 as they recorded their 11th studio album. Caillat claims that “throughout the Rumours journey, Fleetwood Mac went from one end of the fame spectrum to the other.”

Caillat began working with the band in the midst of their personal emotional upheavals. Americans Lindsey Buckingham and Stevie Nicks had recently joined the British outfit of Mick Fleetwood, John McVie and Christine McVie for their 10th album in 1975 and were still adjusting the dynamic of the band. High school sweethearts Buckingham and Nicks were breaking up, the McVies were divorcing and Fleetwood’s wife was having an affair with his best friend. Intra-band power struggles, substance abuse and emotional tension combined with the individual brilliance of these five musicians culminated in the recording of Rumours.

Keep in mind that this is not a tell-all Fleetwood Mac expose. The majority of “Making Rumours” focuses on the technical processes of recording and mixing the album, as well as the development of different sounds on the album, like Buckingham’s guitar-strumming technique on “Secondhand News” and the breaking glass on “Gold Dust Woman.” These passages can be dry, but Caillat explains his methods and the equipment he used in terms that the average reader can understand, audio engineer or not. Sprinkled into the tech talk are plenty of gossip-worthy moments, like the time when Buckingham punched his girlfriend in the face. And another time when Buckingham tried to choke Caillat. Oh, and that other time when Buckingham had a shouting match with Nicks in between takes of their back-up vocals to “You Make Loving Fun.” These moments are shocking enough to make up for their infrequency throughout the book.
The opulence of the late 1970s pervades the story. A typical day in the studio started with bottles of Heineken, glasses of champagne and a few joints. Midday would bring the occasional bump(s) of cocaine. And Caillat never fails to mention what seemed to be every girl he met during this year and what a “terrific body” she usually had, along with how long and beautiful her hair usually was. He even mentions how much hair the guys had. He even gets crabs in his beard from a couple of groupies; then the girl who discovers said crabs promptly sleeps with him. Remember: it was the 1970s.

Caillat’s prose is about what one would expect from a man who does not write for a living. At times it is rife with cliches and redundancy as he wanders into aimless anecdotes about his dog, Scooter, or the little stand where he would grab breakfast.

Even with its elementary writing style and technical overtones, “Making Rumours” paints a portrait of one of classic rock’s most mystical bands at a pivotal point in their career. Caillat manages to capture the essence of Rumours: five musical talents that created incredibly popular music despite the havoc they wreaked on each other’s personal lives. Plus, the reader will leave knowing much more about 24-track tapes than they ever thought they would.

Caillat will be discussing “Making Rumours” at the Texas Book Festival Oct. 27.

Printed on Wednesday, October 24, 2012 as: Caillat showcases making of 'Rumours'