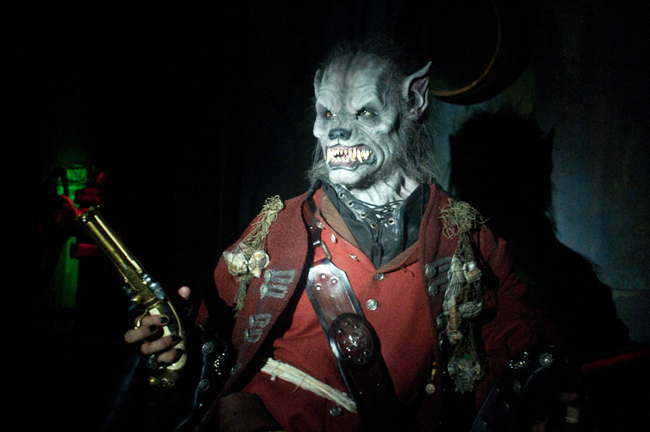 The House Of Torment, located at the East end of the Highland Mall on Airport Blvd and open until Nov. 10, is the place to get your shudders and adrenaline kicks this Halloween. The haunted house is divided in three different parts: a post-apocalyptic world, a Mayan temple and a slaughterhouse, all filled with monsters, zombies and other werewolves.

Modestly nestled in the old haunt of Highland Mall is the House of Torment, a collection of haunted houses that has been setting the bar for 10 years. The House of Torment is heavily lauded by publications like The Wall Street Journal and Travel Channel, and it also consistently makes “Best Haunted Houses” lists from enthusiasts like Haunt World and Haunted House Magazine. This year it is open until Nov. 10 and offers three different attractions.

House of Torment is an all-out attack on all five human senses. The professional designers painstakingly created an interactive obstacle course that keeps participants on edge the entire time.

Jon Love, House of Torment vice president, co-owner and UT alumnus said the seasonal nature of the attraction gives time for the creative team to innovate and improve.

“For two to three months we actually host the event,” Love said. “The rest of the year we basically function as a thematic construction company.”

The 150-member staff does its best to terrorize visitors in a slew of poorly lit corners and crawlspaces.

“The acting was definitely above average. I’ve been to haunted houses where they didn’t even try,” undeclared sophomore Saad Khalid said. “The production was really good, and so were the props.”

Offering a more mythological take on the apocalypse, the first of the three attractions, Cursed: The Howling, attempts to recreate an ancient Mayan temple, Tortuguero. This house is full of werewolves, pirates, native savages and spiders running around in the jungle. Of the three, it is the most thematically sound, complete with a fast-paced jungle soundtrack and bird calls. Unfortunately, it is also incredibly short and leaves a bit still desired.

The second attraction, named The Awakening, is themed as a post-apocalyptic city where a rogue virus caused inhabitants to turn into zombies who fight against an alien invasion. The combination of the two elements chaotically depicts the apocalyptic concerns associated with the year 2012. Highlights include a bathroom with a realistic, disconcerting feces smell, a lightless, subsuming foam pathway and a zombie on a zip line.

The third haunted house, The Slaughterhouse, resembles a barn/slaughterhouse/meat cooler.

“Most people say [the third one] is their favorite. It’s like walking through a movie set. It’s a different style of haunted house,” Love said.

The scene in Slaughterhouse is one of total carnage. Huge actors drenched in blood randomly wander through the nerve-racking labyrinth with chain saws and meat cleavers. Decapitated bodies are common, along with heads hanging from the ceiling, swinging in the presence of disorienting strobe lights.

“I liked the slaughterhouse one the most. It reminded me of ‘Texas Chainsaw Massacre,’” mathematics senior Rutabah Khan said. “I got more scared in that one because it was like a maze.”

Unfortunately, a more real horror in this situation is that this will be House of Torment’s final year at the Highland Mall location. The area is in transition, as Austin Community College purchased the entire 80.2-acre plot for approximately $41 million.

“It’s all very up in the air right now, but we know that we’ll continue to put on the House of Torment in Austin,” Love said. “In Austin things are weird, so we try to be hyper-creative.”

Regardless of the future, attending the Austin horror event is something of a ritual. Tens of thousands of people line up every year to see what Love and his team have concocted in the horror offseason.

“My primary goal is to entertain people,” Love said. “When people come out of the last door either laughing, crying, horrified or smiling, I know we did a good job.”

Printed on Wednesday, October 24, 2012 as: House of Torment revolutionizes thrills