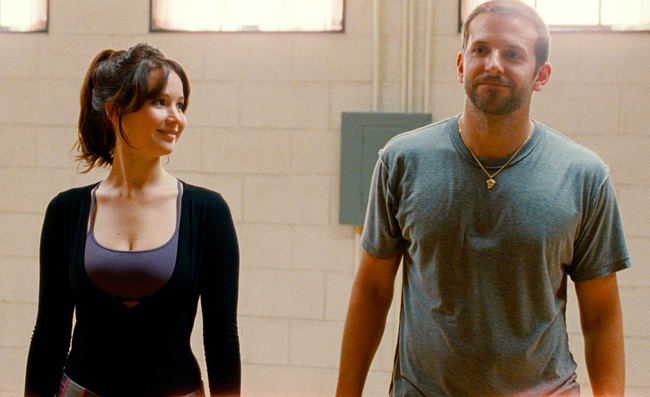 David O. Russell is one of Hollywood’s most unpredictable working filmmakers. Russell’s journey from war comedy “Three Kings” to Oscar-winning boxing drama “The Fighter” is one that’s fairly hard to chart, especially because one of his interim films, “Nailed,” is likely never going to be released. His new film, “Silver Linings Playbook,” is another unpredictable step for Russell, a romantic comedy dressed up as an inspirational examination of mental illness.

Set in Philadelphia, “Silver Linings Playbook” tells the story of Pat Solitano (Bradley Cooper), who is discharged from a mental hospital in the film’s opening scene. He returns home to his parents (Robert De Niro and Jacki Weaver), who are instantly on edge about a possible repeat of the incident that got him incarcerated in the first place. Pat’s erratic behavior doesn’t help their concerns, but once he meets the just-as-nuts Tiffany (Jennifer Lawrence) and agrees to participate in a dance contest with her, things slowly start to come back together for Pat and his family.

When you think of this generation’s best dramatic actors, Bradley Cooper is by no means the first name that comes to mind, but he is quite impressive as a man who’s just starting to figure out how deep his mental deficiencies run. Cooper is imposing here, always on edge, and when he loses control of his illness, there’s an intensity to his performance that’s only matched by the sorrow he feels once he recovers. It’s unexpectedly harrowing and moving work, and Cooper would be receiving some serious awards-attention if not for an overriding factor.

That factor is the stupendous Jennifer Lawrence, who turns in her most accomplished performance to date. Between launching a film franchise with “The Hunger Games” and this film, Lawrence is having an incredible year. She plays so many different notes, hitting all of them perfectly. In just one scene, Lawrence can go from sexy to wounded to furious. At one point she even goes nose-to-nose with Robert De Niro and wins, something very few actors can say. If there’s one reason to see “Silver Linings Playbook,” it’s Lawrence’s work, because there really aren’t enough good things to say about her performance.

The rest of the cast is filled with essential performances, some bigger than others, all of them ranging from good to excellent. As Pat’s bookie father, De Niro is just as crazy as his son in an entirely different way. Weaver and Shea Whigham round out Pat’s family, both instrumental to exploring Pat’s mental issues while turning in solid performances.

“Silver Linings Playbook” isn’t directed with the precision that we’ve come to expect from Russell, but some of that has to do with the emotional messiness of the material. Mental illness is a difficult thing to make cinematically compelling, and Russell mixes some very dark material with big laughs. The film gets a bit shrill at times and the pacing a bit spastic, but there’s some creative, evocative staging by Russell. David O. Russell has made another crowd-pleaser with “Silver Linings Playbook,” one that plays in heavy emotional territory. Strong performances and a solid handle on tone keep the film from becoming too overbearing, but an ending that’s too sweet by a significant measure concludes the film on a remarkably convenient note. Even so, it’s an entertaining, engaging film and worth seeing, even if only to see Jennifer Lawrence and Bradley Cooper give their best performances to date.