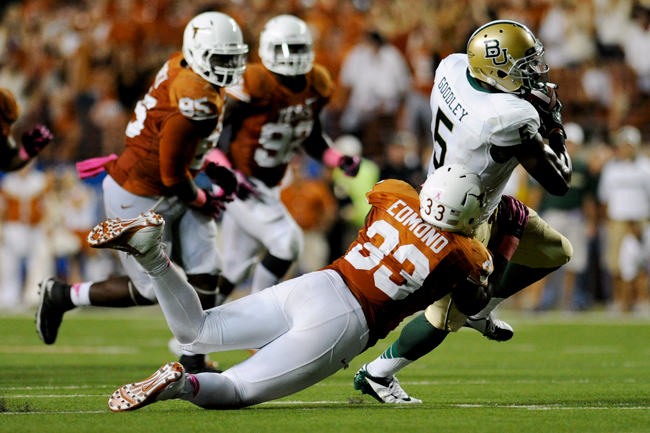 Trey Edmond and the rest of the linebackers have struggled so far this season. Without Jordan Hicks’ leadership, the corps have allowed opponents to earn 5.24 yards per rushing attempt. But, on Saturday, Edmond stepped up and showed that he can lead this new generation of linebackers.

Texas hadn’t been able to stop the run all season, and that had been a direct reflection on middle linebacker Steve Edmond. But just as the Texas defense made strides Saturday against Baylor, so did Edmond.

Edmond led the team with 10 tackles and was all over the field. He was quick from sideline-to-sideline and looked significantly more instinctive attacking the ball carrier. His efforts earned him the team’s most valuable player award on defense against the No. 1 offense in the country.

However, it was one play in particular that elevated Edmond’s showing from good to great.

With only a few seconds remaining in the fourth quarter, Baylor was driving and looking to retake the lead with a touchdown. The Bears had just reached midfield, and on 3rd and 1 Baylor called a run up the middle.

It’s the kind of play that’s plagued the Longhorns all season. Texas is allowing 5.24 yards per rushing attempt and are 109th out of 124 teams in rushing yards allowed per game.

In this case, Edmond was there to make the play. He met Baylor running back Glasco Martin in the gap created by the Bears’ offensive line, and the pair collided. Edmond was able to stop Martin’s momentum and, most importantly, forced the ball to come loose.

“I put my head on the ball, and it popped out,” Edmond said. “I didn’t even know I made him fumble. Everybody just started screaming. I was like, ‘What is going on?’ until I saw the replay.”

The fumble was exactly the kind of game-changing play the Longhorn defense has desperately needed, and it was one of the first times this season in conference play that a member of the line-backing core made an impact defensive play.

It was a sign of growth for Edmond and for Texas’ youthful linebackers — even though they gave up 255 yards on the ground — that has desperately missed their leader, Jordan Hicks.

“I thought the young linebackers did stop the run better tonight than we’ve done,” defensive coordinator Manny Diaz said. “Still didn’t stop it great, obviously, but it was better … We made some plays. We’re doing better. We’re sure not where we need to be, but we’re taking baby steps here.”

The same can be said of Edmond.

Early in the season he was missing assignments, tackling with bad technique and in the wrong spot way too often. But he’s always shown flashes of his potential.

At 6-foot-3-inches and 255 pounds, Edmond is an imposing presence up the middle. He’s a freight train when he tackles opponents, and for someone with his size he’s surprisingly fleet on his feet. That combo has allowed him to make a few highlight-reel tackles this season, and his instincts also led to his pick-six against Ole Miss.

The Baylor performance was Edmond’s best of the season, but Diaz isn’t quite ready to “make any light on proclamations.”

“I know he played his best as to what he did to this point,” Diaz said. “He’s becoming more familiar with our system and how it works. And keep in mind: it was under very stressful environments. [The Bears] are the most frantic offense in the country. But there are a lot of things he can be excited about.”