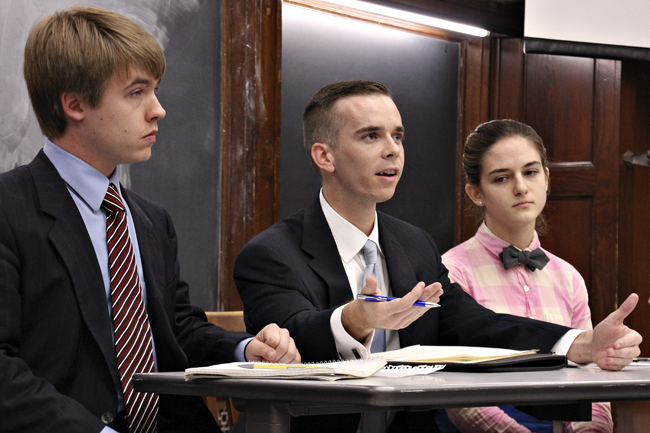 Despite College Republicans’ decision to opt out of a debate Wednesday evening sponsored by Hook the Vote, more than 100 students attended the debate to learn the stances of University Democrats and Libertarian Longhorns on various issues.

Danny Zeng, government senior and communications director of College Republicans, said Tuesday night the organization opted out of the debate due to a lack of organization and concise planning on the part of Hook the Vote.

“We believe a good government comes from the ground up, not the other way around,” Schmittou said. “For too long we have felt this country has been dominated by a rigid two-party system that does not have the answers holding the interests of the people at heart, and Gary Johnson has proven a consistent record of fostering good, clean government.”

University Democrats defended the Obama administration and urged for a second term.

Martinez said America was losing up to 800,000 jobs a month before President Barack Obama was inaugurated. However, he said 5.2 million jobs were added four years later, followed by 34 months of consecutive job growth. Martinez said President Obama has had many accomplishments on social issues, such as the repeal of Don’t Ask Don’t Tell, a military policy prohibiting openly gay, lesbian or bisexual Americans from serving in the military. Martinez said President Obama is also a women’s rights champion.

“Time and time again President Obama has proven to be an effective leader that knows what he is doing,” Martinez said. “He can lead this country back to prosperity. He is a realistic candidate for the President of the United States.”

Billy Calve, government senior and Hook the Vote director, said the debate’s high number of attendees reflected students’ desire to hear different perspectives. He said Libertarian Longhorns did well at stepping in and representing their beliefs.

“At the end of the day we were able to represent different pespectives on campus,” Calve said. “We were able to provide students with a chance to hear different political ideologies and learn what each group is about.”