Changing of the guard for Jayhawks quarterbacks 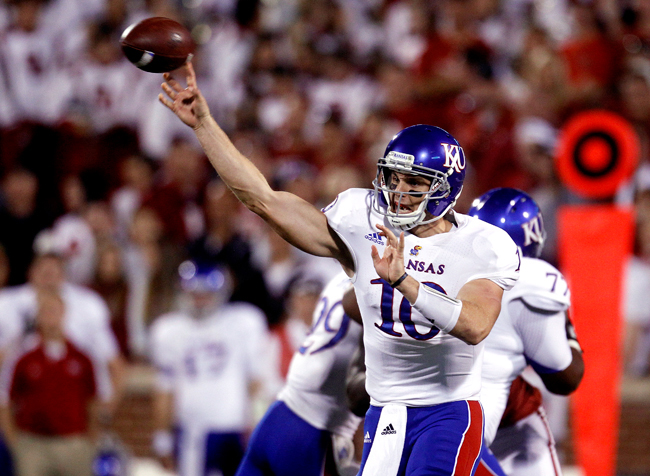 Kansas quarterback Dayne Crist throws against Oklahoma in the second quarter of a game in Norman, Okla., Saturday, Oct. 20. Crist has been largely ineffective this season and now redshirt freshman Michael Cummings has assumed the starting role.

The quarterback situation in Lawrence, Kan. seems gravely familiar: a five-star high school prospect flops at the collegiate level before deciding to transfer to salvage his career.

At the beginning of this season, senior transfer Dayne Crist was a dark horse in some analysts’ Heisman talk, with 85-1 odds for the award. Seven games into the season and Crist has already been relegated to the backup position, giving way to redshirt freshman Michael Cummings to try and turn around the Jayhawks’ 1-6 season.

“We’re going to start Michael and we’ll see how it goes,” head coach Charlie Weis said. “I think that, at this point when you’re 1-6 and things haven’t gone real well, I think you owe it to your team to see what you have.”

Last weekend in a 52-7 loss to Oklahoma, Cummings started the game but Crist saw ample playing time. However, after the loss Cummings was given the reins full time to try and jump-start the program.

Crist started his college career at Notre Dame in 2008 where Weiss had recruited him to play before he left for a coaching position with the Kansas City Chiefs after the 2009 season. After sitting out in 2008, Crist had a minor contribution in 2009 as the backup to Jimmy Clausen.

In 2010, he was named the starting quarterback where he threw for over 2,000 yards and 15 touchdowns and seven interceptions. However, a ruptured patellar tendon in his left knee ended his season. In 2011, he was given another opportunity to start, however, midway through Notre Dame’s season opener he was replaced by Tommy Rees.

At the end of 2011, Crist decided to transfer to Wisconsin before Weis convinced him to come to Kansas instead. Weis had just been named the head coach of the Jayhawks after serving as Florida’s offensive coordinator for a season.

His transfer to Kansas was supposed to be a fresh start for both Crist and the Jayhawks. Crist was healthy and playing for a coach who had a history of developing quarterbacks for the NFL. Kansas was also in desperate need of a quarterback after Kansas only won two games in 2011, both against non-conference opponents.

So far this season, Crist has amassed negative 72 yards rushing and 1,101 yards in the air. He is 91-for-184 which translates to a 49.5 competition percentage. He has a staggering seven interceptions with only three touchdowns so far this season. His quarterback efficiency rating? An unimpressive 98.

“The season is not over yet, but I think that right now he’s disappointed,” Weis said about Crist. “I’m disappointed and we’re both disappointed … if the status quo doesn’t show any improvement, then you have to find some way to make improvements and this is one of the ways.”

Last season, Texas shut-out Kansas 43-0 in Austin. Kansas went on to a 2-10 season and finished winless in the Big 12. This season has proven to be no
better. Kansas is sitting at a 1-6 record, again without a win in the Big 12.