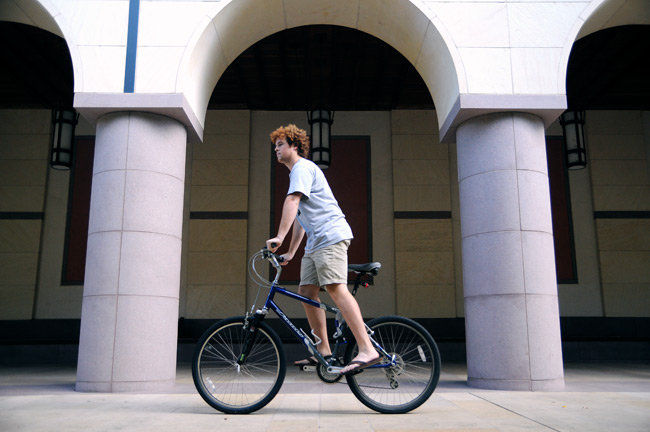 Business junior Andrew Bowen frequently rides his bike, walks or takes the bus rather than drive to school. The cost of a parking pass and time it takes to find parking on campus factors into why he chooses alternate means of transportation.

As the search for a parking spot at UT becomes more difficult, more students are opting for alternative means of transportation to take stress off of themselves, their bank accounts and the environment.

Walking, biking and various forms of shared transit, including city and University buses, have emerged as UT students’ top alternatives to personal vehicles. Blanca Juarez, alternative transportation manager for Parking and Transportation Services, said this change is continually occurring at UT because of the reduced stress, cost and environmental impact of alternative transit when compared to the personal vehicle.

Juarez said the University has increasingly pushed these modes of transit, recently introducing a Green on the Go campaign to promote alternative transit in order to reduce campus congestion and environmental pollution.

Juarez said she personally chooses to take Capital Metro’s MetroRail to UT because of the reduced stress and free time it gives her.

“It’s just one way to prepare myself for the day or on my way home to not have to deal with traffic,” Juarez said.

University-endorsed alternative transit services include carpool and vanpool programs; shuttles to major Texas cities on weekends; the availability of charter buses for special events; the Zipcar “carshare” program; BikeUT, an initiative to make the University more bicyclist-friendly; an extensive UT shuttle program and a partnership with Capital Metro that allows students, faculty and staff to ride all mainline buses and MetroRail services free of charge.

She said with all the alternative transit options available, most people don’t need a car at the University.

Juarez said the most used form of alternative transit the University offers is its shuttle system.

She said the shuttle system is one of the largest university shuttle systems in the world, with 13 routes and passengers taking more than 5.2 million rides per year.

Alvich said Megabus tickets start at $1 and go up to the standard price of similar bus tickets at rival companies as the number of available seats on specific trips declines.

Andrew Bowen, engineering route to business junior and West Campus resident, said although he has a car, he chooses to bike, walk or take the bus to get around most of the time because of the reduced costs, stress and time.

“I just drive to go to friends’ places that live far away from campus, really,” he said. “I don’t have a [UT] parking pass, and I don’t want to pay that much because it’s kind of pointless.”

A similar trend is occurring across the nation, according to a study released in April by the U.S. Pirg Education Fund & Frontier Group.

According to the study, for the first time since World War II, Americans of all ages are driving less, with the most noticeable change seen in young people between the ages of 16 and 34.

The Parking Issue: A Day with a PTS Officer from The Daily Texan on Vimeo.

Printed on Friday, October 26, 2012 as: Alternative wheels roll onto campus