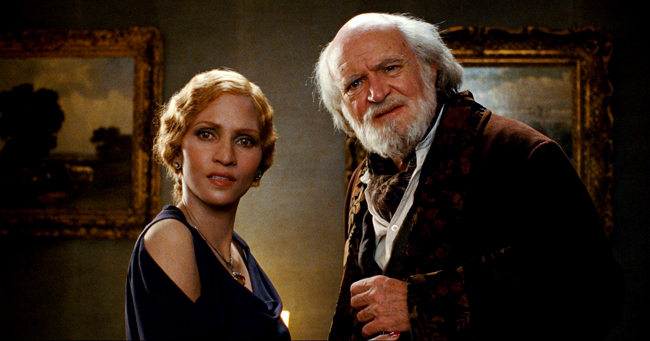 Director: Tom Tykwer, Andy and Lana Wachowski
Genre: All of them
Runtime: 172 mins

“Cloud Atlas” isn’t a film that can be assessed on any sort of traditional scale. It has half a dozen protagonists, scoffs in the face of three-act structure, and spends the majority of its running time cutting between timelines, a single edit sometimes bridging centuries. It’s also the year’s most ambitious film, an unprecedented feat of storytelling from directors Tom Tykwer and Andy & Lana Wachowski.

It’s a dense, challenging work, and “Cloud Atlas” moves at a blistering pace. In its first 20 minutes or so, it hits us with a barrage of names and faces, setting up six different stories in six different timelines, all of them overlapping in one way or another. Adam Ewing (Jim Sturgess) sails across the Pacific in the 1800s, while struggling composer Robert Frobisher (Ben Winshaw) reads his journal in the 1920s. Halle Berry stars in a thrilling segment set in the 1970s, and her story is turned into a novel that publisher Timothy Cavendish (Jim Broadbent) contemplates in 2012 before being locked away in a nursing home. In a dystopian future, Sonmi-451 (Doona Bae) finds herself leading a revolution, and Zachry (Tom Hanks) leads a crew of refugees in a post-apocalyptic wasteland.

It’s a lot to absorb, and “Cloud Atlas” struggles to get off the ground at times. Its opening is easily its weakest and most challenging section, as it struggles to set up the various narratives it will be following. However, once it gets going, “Cloud Atlas” quickly becomes one of the year’s best films, an epic work of genuine, touching optimism. It’s an uncommonly upbeat film, focused on the ways that people can do good for one another, and perhaps “Cloud Atlas’” best feature is the way that its character arcs function within the story.

You see, each of the film’s principal actors pop up in multiple roles, often reoccurring in each of its segments. For example, Tom Hanks plays a doctor tending to Adam Ewing, a hotel clerk renting a room to Robert Frobisher, a doctor giving information to Halle Berry’s Luisa Ray, a vengeful writer working for Timothy Cavendish, an actor Soonmi-451 glimpses on a movie screen, and post-apocalyptic badass Zachry. The act of casting the same actor in multiple roles is more than a parlor trick, and watching six different versions of Tom Hanks figure out what it means to be a good person over the progression of six different timelines makes the conclusion of Zachry’s story all the more meaningful. Plus, audiences are treated to Hugo Weaving playing half a dozen distinct villains, and that alone makes “Cloud Atlas” worthwhile.

The three people responsible for making “Cloud Atlas” the film it is are Tom Tykwer and the Wachowskis, and their construction for the film is inspired. Once “Cloud Atlas” gets rolling, it’s rare that a sequence unfolds without three or more timelines cutting their stories together, each edit perfectly timed to heighten suspense or draw a parallel. It’s a breathless, hypnotizing way to tell a story, and the way “Cloud Atlas” unfolds establishes a cinematic vocabulary and mode of storytelling that’s refreshing in its simplicity and precise execution.

It can challenging for an actor to play multiple roles and make them distinct from one another, but everyone in “Cloud Atlas” is up to the challenge. Halle Berry and Ben Winshaw are effective in their big segments, but just as impressive is the way “Cloud Atlas” renders them unrecognizable in other timelines, dressing Berry up as an old man or Winshaw as a brutal post-apocalyptic tribesman. It’s a strong, commendable commitment to theme and message, and one of many ways that “Cloud Atlas” bends the barriers of how a traditional Hollywood film functions.

Two performances stand above the rest, however. Doone Bae plays futuristic waitress-turned-revolutionary Sonmi-451, and watching her make that transition is the most fascinating transformation in “Cloud Atlas.” She starts out oblivious and innocent, but once she starts to deal with the ugly realities of her world, it’s heartwrenching. However, Bae maintains a basic serenity throughout, and her final moments are the most powerful in a film full of big emotional wallops, a perfectly timed series of edits tying two of the timelines together in an unexpected, satisfying way. Jim Broadbent also deserves commendation for his work as Timothy Cavendish, a publisher condemned to a nursing home by his villainous brother. His escape from the home is the most broadly comedic segment in “Cloud Atlas,” but probably its most plainly heartwarming, and Broadbent anchors the segment with his easy, befuddled charm.

There’s clearly a lot to discuss about “Cloud Atlas,” and it’s a film I can’t wait to really dig into. A second viewing already offers up numerous rewards, some coming from being able to spot actors in roles you may not have recognized them in, or simply being able to better appreciate a particularly resonant edit. “Cloud Atlas” manages to balance political thriller, science fiction, period drama, and slapstick comedy without ever overdoing it, and its steadfast belief in humanity’s basic goodness is uplifting in a way that very few films can manage these days. The result is a film that’s required viewing, a beautiful feat in writing, editing, directing, and acting – an unapologetic masterpiece.