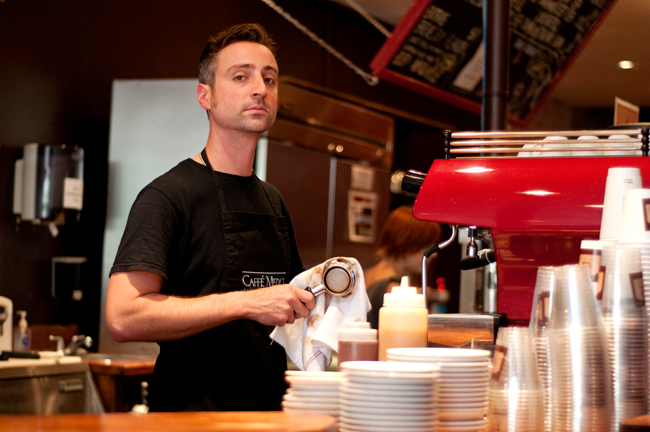 Thomas King, manager and barista at Caffé Medici, expresses his frustration with the unavailability of free parking spots for employees near the coffee shop.

Thomas King searches West Campus for parking before every shift at Caffé Medici on Guadalupe Street, where he is a manager and barista.

Like several businesses on the Drag, Caffé Medici does not have employee parking spots, and King said employees have to find parking in West Campus if they commute and don’t want to pay for a spot.

However, come December, new parking meters will eliminate many of the spots that service industry laborers use in the neighborhood.

“I think it’s an inappropriate and wrong way to make money,” King, who commutes from another neighborhood, said. “In some ways I feel like it’s a tax for anyone who works a service industry job. Students can buy parking spots, but not us.”

Patrick Dougan, assistant store manager at apparel store Tyler’s, said the new meters could make parking more difficult for him and his co-workers. On any given weekday at Tyler’s, there are 12 employees with cars at work but only six employee parking spots, Dougan said.

“There’s not enough parking to go around, and that’s the issue they are trying to alleviate. But it might inhibit a lot of people from being able to work,” Dougan said. “We’ve got to set an alarm and make a quick run on our breaks to pay for the meter if we don’t want to get a ticket.”

The new parking meters will have a five-hour time limit and operate Monday through Saturday from 8 a.m. to 6 p.m.

The initial meter fees will pay back the city bonds used to install the meters. Eventually 15 to 18 percent of the funds will go to improve walkways and lighting in West Campus, Brian Donovan, chair of West Campus’ neighborhood association’s parking committee, said. The rest will pay for the costs of credit card transactions, administrative expenses and other city duties.

Donovan said the new meters will free up spaces for commuters in West Campus by requiring them to move their cars, but he added that the meters are not a long-term solution to the neighborhood’s parking problem.

Residents at buildings that were built in or before 1959 can apply for parking permits that exempt them from paying for street parking. Before 1959, the city did not require builders to have parking available at West Campus complexes, so the city may issue exemptions to some of these residents.

The city will determine the number of parking permits issued at these residences in an assessment of need based on the ability of each building to provide parking spaces.

For now the new city ordinance states these permits will last for a year and cost $20, although that may change in the future.

Donovan said he would like to see the city implement improved rapid metro bus systems and take a study of parking around the University in order to provide alternative options for transportation that do not impede workers in West Campus.

“I think we have insufficient transportation choices now,” Donovan said. “The most effective way for workers [to get to work] now would be carpooling, but that’s still not a pretty picture. We need an assessment, and we need to look at this thing comprehensively.”

Printed on October 26, 2012 as: Added meters may hurt workers, residents