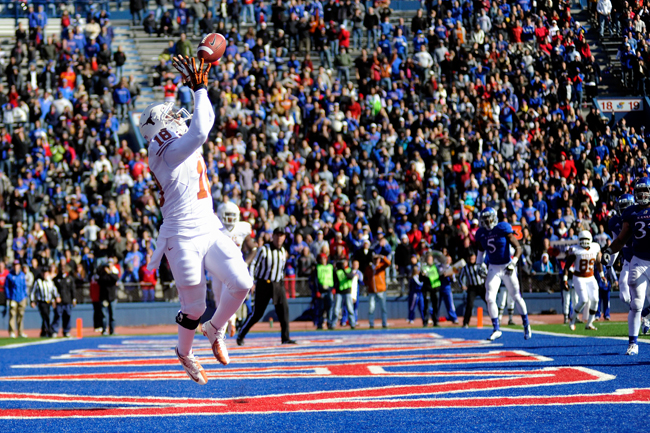 Texas defeated Kansas.  But it certainly didn’t feel like a win.

With fifteen seconds left, backup quarterback Case McCoy saved Mack Brown from what would have been the worst loss in his tenure at Texas.

McCoy replaced David Ash in the fourth quarter and made the most of it.  His 16-yard pass to Jaxon Shipley on fourth and six and then his 39-yard pass to Mike Davis gave the Longhorns a first and goal with less than 1:30 left.

After the offense tried to run it twice, McCoy sealed the win for the Longhorns on a third down touchdown pass to D.J. Grant, making the final score 21-17.

"The offensive staff thought he [McCoy} was ready to go,” said head coach Mack Brown. “We thought case was prepared and he gave us the little momentum that we needed to get it turned in the right direction and we made some speed plays there. We did things that we needed to be doing with him."

While the defense has been receiving the blunt of the criticism this season, today the offense was the problem.

Ash and the rest of the offense struggled throughout the game.  He went 8-for-16 for 63-yards with two interceptions.  The Longhorns only finished four of their twelve third down conversions.  Before the game, the Longhorns were tied for tenth in the country in red zone offense.  But they went three-for-five against Kansas.

While the offense couldn’t capitalize, the defense continued to be thwarted by the run.  Kansas accumulated 234-yards rushing with 178 of those yards coming from James Sims.  Missed tackles were less of an issue against Baylor, but the defense seemed to take a step back on Saturday with missed tackles allowing the Jayhawks to gain crucial yards.

The Jayhawks saw the Longhorns’ weak point and dominated the defense on the ground.  Quarterback Michael Cummings went three-for-nine and didn’t even throw a pass in the second and third quarters.

Texas scored on its first drive of the game when Joe Bergeron ran the ball in for a 3-yard touchdown run.  Texas wouldn’t find the end zone again until the fourth quarter.

Kansas’ Tony Pierson scored on an 11-yard run and Christian Matthews added a 15-yard touchdown in the second quarter to put the Jayhawks up 14-7.

Marquise Goodwin sparked the struggling Texas offense when he rushed for 41-yards and later scored on an 11-yard run to tie the game at 14 in the fourth quarter.

Johnathan Gray had his best game of the season and led the Longhorns with 111 rushing yards.  The other running backs did not make an impact.  While they were ineffective, Ash couldn’t get anything going and threw two picks.  Both interceptions were deep in Kansas territory.

The Longhorns were favored by 21 points and defeated the Jayhawks 43-0 last season. While they did pull out the win and became bowl eligible, they took major steps back and it looks like another quarterback controversy may be around the corner.

“It was really, really hard to win this game and it can give this team and this staff so much confidence moving forward to play poorly most of the game and win,” Brown said. “That is when you get better, believe it or not. Not the blowouts. You walk out and feel too good about yourself, one like this, we have a win and we have their attention next week and that's about as good as it gets."