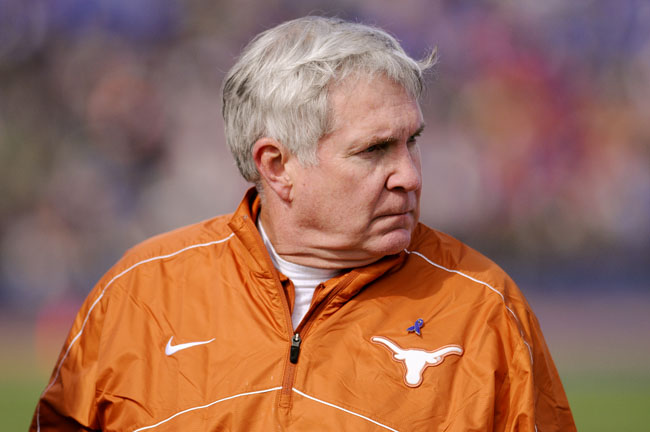 Sources say head coach Mack Brown may step down at the end of this season.

As far as wins go, that’s about as bad as it gets.

Kansas, a team that had not beaten an FBS squad this year or a Big 12 team in two years, nearly beat Texas. The Jayhawks were the superior team for the better part of the Longhorns’ 21-17 win in Lawrence, Kan. Saturday — an awful reflection of where Texas is eight games into this season.

“We have a win and we have their attention next week,” head coach Mack Brown said. “That’s about as good as it gets.”

No, it’s not. Not even close. And is that to say that Brown didn’t already have their attention before last weekend?

If Case McCoy had not rescued the Longhorns in the waning moments of Saturday’s game, people would have been calling for Brown’s head, or at least his job — and rightfully so. Because this was a miserable month for Texas football.

The Longhorns were narrowly beaten by a then-overrated West Virginia team that has since lost twice. They were embarrassed in a 63-21 loss to Oklahoma the following week. Texas has since won two straight, but giving up 50 points at home to Baylor before barely beating a hapless Kansas team is not exactly what the Longhorns had in mind for this year.

McCoy entered the game with Texas trailing, 14-7, and left it with the Longhorns having won by four. He threw for 68 yards on the final drive, three more than David Ash passed for the entire day.

If McCoy doesn’t start every game the rest of the year, he should at least start this weekend in Lubbock against Texas Tech.

When it comes to arm strength and mobility, Ash has the upper hand. He’s made significant strides this year, but, right here and right now, McCoy gives Texas the best chance to win. We could find out who will start at quarterback when the Longhorns release their depth chart Monday.

While they fill it out, they need to be mindful of how it was filled out nearly five years ago when McCoy’s older brother was the man under center.

Coming off a 38-30 loss to Texas A&M in 2007, the Longhorns’ second straight to the Aggies, Brown opened up every position — from the waterboy to the head coach himself. Facing a favored Arizona State team in that year’s Holiday Bowl, Texas triumphed, 52-34, and began a stretch where Colt McCoy led the Longhorns to victories in 26 of 28 games following the loss to A&M.

That’s the mentality Texas needs right now. Everyone’s job has to be up for grabs. Guys like McCoy and sophomore safety Josh Turner, who has consistently outplayed Adrian Phillips and Mykkele Thompson, need to start.

McCoy has led three fourth-quarter comebacks over the last season and a half. He’s only been picked off four times in 168 career throws while Ash has thrown five interceptions in his last three games.

This is a Longhorns team that can’t afford any more games like the one it played last Saturday and it’s a team that has to start McCoy at quarterback this weekend.