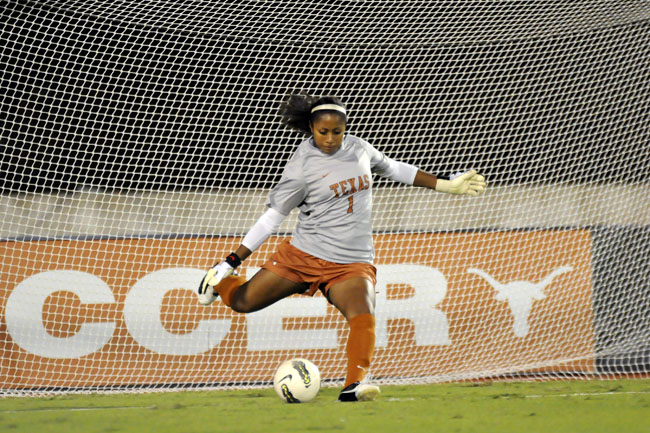 Freshman goalkeeper Abby Smith boots a ball out of the Texas next against Big 12 regular season champions West Vriginia. The Longhorns finish the regular season 7-10 with a 4-4 Big 12 record.

In its first conference game of the season, Texas beat Iowa State by four goals for an easy win. Every game since then has been a nail-bitter with all six being decided by just one goal. Friday’s regular season finale was no different. West Virginia, having already clinched the regular season conference championship, and the No. 1 seed in the Big 12 tournament, wrapped up its schedule with a 1-0 win against the Longhorns on Friday.

The Mountaineers and Longhorns played 90 minutes of scoreless soccer, but in overtime, West Virginia’s offense finally struck. A shot was fired into the box and flicked away before Texas keeper Abby Smith could bring it in. The score went to West Virginia’s Kara Blosser, who slipped the ball past Smith for the deciding goal.

Despite facing the regular season Big 12 champions, Texas did not back down, and kept the pressure up on the Mountaineers for much of the game. Texas outshot West Virginia and forced Mountaineer goal keeper into seven saves. Seniors Hannah Higgins and Kristin Cummins both had good opportunities to break the game open, but West Virginia keeper Sara Keane kept the Longhorns scoreless.

Despite the loss, Texas landed a fourth seed in the conference championships beginning Wednesday. Texas will face Oklahoma in the first round. The Longhorns topped the Sooners 1-0 in Norman, Okla. earlier this season. A win would likely get Texas another shot at the Mountaineers, who will face TCU in the opening round of the Big 12 Championships. Texas won its opening round match last season against Texas Tech before losing 1-0 to Oklahoma State in the semifinals.