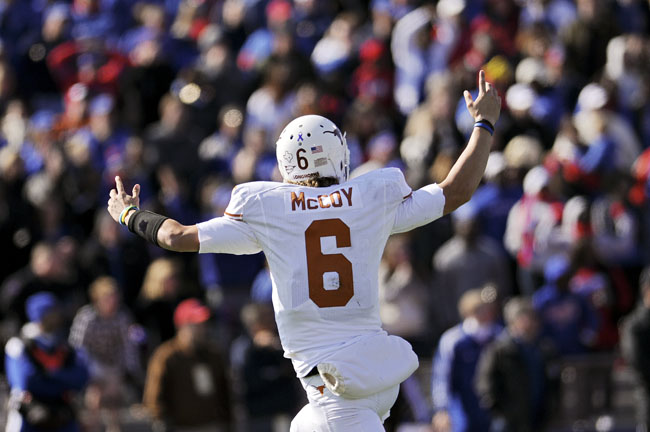 Case McCoy led the Longhorns to a fourth-quarter comeback in the final minutes against Kansas, but David Ash was named the starter this Saturday’s game.

What could Case McCoy have done differently to earn the start this week against Texas Tech?

Remember, this isn’t an NFL combine we’re talking about. It’s a season-altering road game in one of the Big 12’s most hostile environments. Texas Tech’s defense won’t be as forgiving as Kansas’ defense, and attributes like arm strength and quickness won’t be as valuable as moxie and the uncanny ability to come through in the clutch. This is why McCoy should start against the Red Raiders, except the decison has already been made in favor of David Ash.

“I was prepared to be the starter,” McCoy said. “We didn’t play great [against Kansas]. We didn’t do all the right things but we won. When you look at the notches in each column, that notch went in the win column. Everyone needs to chill out.”

Maybe so. But McCoy was the reason Texas got to put a notch under the win column last weekend. After Joe Bergeron’s 3-yard touchdown run on the Longhorns’ opening possession, Texas didn’t score on any of its next 10 drives.

McCoy was under center for the Longhorns’ last two drives, both of which ended in touchdowns. He threw for 68 yards on the decisive possession, five more than Ash threw for the entire game.

“David knows the offense didn’t produce when he was in there and it was very obvious that when Case was in there, that it did,” head coach Mack Brown said. “We said in the preseason that we have two really good quarterbacks and both of them can play. Case was prepared and ready. We’re so proud of the job he did Saturday.”

In the last 38 drives Ash has been under center, Texas has scored just nine touchdowns, with Ash scoring only one of those himself while throwing four interceptions over that stretch. Meanwhile, McCoy has led the Longhorns into the end zone in five of the last seven drives he’s been on the field. He’s completed 14 of 20 passes for 224 yards and four touchdowns on those possessions.

“I’m just really proud of Case and how he was able to come in and handle that,” junior guard Mason Walters said of McCoy’s play against the Jayhawks. “I think it’s a testament to him and how hard he’s worked since he hasn’t been the starting guy. He hasn’t completely shut it down yet and he’s not going to.”

Maybe the ball wobbled too much when he lofted it to D.J. Grant in the end zone during the final minute of Texas’ 21-17 win over Kansas last Saturday. Maybe his first pass of that game came too close to being intercepted.

Maybe his two touchdown passes against Oklahoma didn’t have enough zip on them. Maybe it’s been too long since he led fourth-quarter comeback victories against BYU and Texas A&M last season.

Whatever the reason, the Longhorns announcing that David Ash will start Saturday in Lubbock sets a bad precedent by not rewarding McCoy’s efforts in Lawrence.