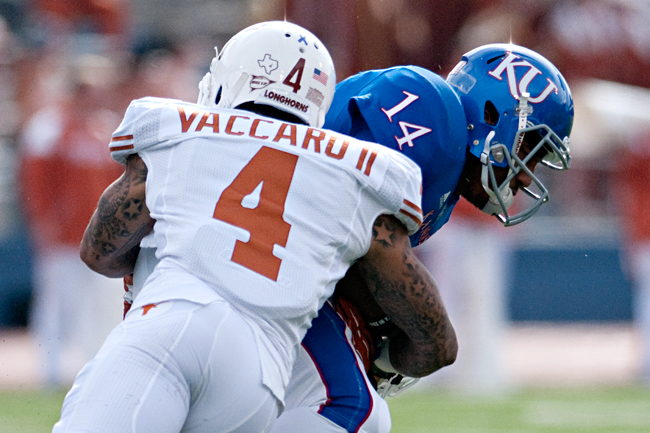 Despite a slow first half, Texas defense, including senior safety Kenny Vaccarro, allowed a meager three points from the Kansas Jaywhawks.      " />

Despite a slow first half, Texas defense, including senior safety Kenny Vaccarro, allowed a meager three points from the Kansas Jaywhawks.

Defense takes step forward in second half
The Texas defense was gashed for more than 100 yards on the ground and two touchdowns in the second quarter of Saturday’s game against Kansas.

But in the second half something changed. All 11 members of the unit began to attack the ball on every snap, and the Longhorns buckled down to surrender only three points during the final two quarters.

“Guys just played faster,” cornerback Quandre Diggs said. “Kind of just see ball, hit ball. We have 11 guys swarming to the ball, just getting after it. It’s always fun to see as we watched film yesterday just guys attacking the ball; everybody jumps on the pile.”

Diggs went on to credit the second half improvements to a simplification of the defense. Defensive coordinator Manny Diaz went back to the basics, and it paid dividends.

“We just went back to our base stuff,” Diggs said. “Our defense isn’t very complicated. It’s just mental lapses here and there.”

Bowl-eligible but not finished
With their win against Kansas Saturday, the Longhorns became bowl-eligible for the second year in a row.

At Texas, becoming-bowl eligible didn’t use to be an accomplishment, but after a 5-7 season in 2010, it’s a marked achievement for this squad.

“It’s a little bit of weight [off of our shoulders],” senior safety Kenny Vaccaro said. “But honestly I think it’s just the next game. We won a game. As a senior, my goals are higher than a six-win season. I’m playing for much, much more.”

For Vaccaro that’s a higher draft stock and, more importantly, a potential BCS bowl. Despite the team’s poor play thus far, the players firmly believe if they win out to finish 10-2, the BCS is still a possibility.

“It’s a very big deal to be bowl eligible,” wide receiver Mike Davis said. “But if we win out, I feel we can still go to a BCS bowl.”

However, it’s possible that the Longhorns won’t experience anything quite as unique as Jones AT&T Stadium in Lubbock this season.

The fans come early, they’re loud and often times rude — Davis claimed he had a tortilla thrown at him his freshman season — and they passionately support their team throughout the entire game.

“It’s a great rivalry,” quarterback Case McCoy said. “That atmosphere is going to be crazy on Saturday. I’ve never been, but I’ve always heard about it. I just know that they’re out there getting ready right now. The fans are surrounding their stadium right now. It’s going to be fun.”

Mack Brown heaps Heisman praise on Seth Doege
Texas Tech’s Seth Doege has quietly established himself as one of the best quarterbacks in college football this season.

He’s thrown for 2,540 yards and 30 touchdowns, is ninth in the nation for passing efficiency and has only tossed eight interceptions. Doege, along with a vastly improved defense, has led Tech in its resurgence and earned it a 6-2 record.

“I don’t see, if he’s not, how Seth Doege could not be up for the Heisman,” Brown said. “He is unbelievable. I haven’t felt he’s got the publicity he should.”

Printed on Wednesday, October 31, 2012 as: Defense steps up after halftime