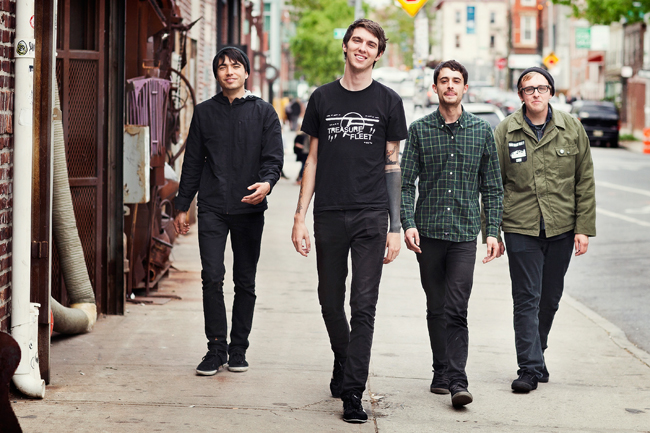 California punk band Joyce Manor will be performing on the Black Stage at Fun Fun Fun Fest on Saturday, November 3, from 1:20-1:50. Photo courtest of Karen Seifert. " />

California punk band Joyce Manor will be performing on the Black Stage at Fun Fun Fun Fest on Saturday, November 3, from 1:20-1:50. Photo courtest of Karen Seifert.

Punk rock can be esoteric, but Joyce Manor’s fresh take on the genre appeals to a wide audience. Having recently received critical acclaim for its debut self-titled album, the band has been touring almost nonstop since March in support of its sophomore release Of All Things I Will Soon Grow Tired. The band’s last gig on the tour is Fun Fun Fun Fest.

The Daily Texan spoke with vocalist and guitarist Barry Johnson about touring and the new record.

The Daily Texan: How would you describe your music to a set of fresh ears?
Barry Johnson: Uh, we’re a band. We have guitars, bass, drums and vocals. We’re kind of loud and kind of annoying.

DT: Why is your band called Joyce Manor?
Johnson: It was the name of an apartment building by my house, and it sounded pretty dynamic. A while ago I had a thrash band, and at first I was going to use it as my fake stage name, but my friend Shaun called me and asked if my old band wanted to play a show but we had broken up, so I said my new band would like to play the show. I didn’t even have a band, so [guitar player] Chase [Knobbe] and I threw a couple of acoustic songs together. It was in a short amount of time and out of necessity, and we’ve come a long way since then, but the name just kind of stuck.

DT: Looking at your tour history, it looks like you’ve been touring almost all year. How’s the experience been for you?
Johnson: It’s been cool but exhausting. It’s something I’ve always wanted to do, but it’s like working at a book store; you think it would be the best thing in the world, and then you realize that there’s elements you like and don’t like, unless you’re the person where you like everything about something. You kind of idealize the field of work you want to get into. This is our first experience with lengthy amounts of touring, but it’s just so exhausting, and it can affect you negatively. After five days we’re going to get back for eight months.

DT: Of All Things seemed like an eccentric combination of styles. You have a cover of “Video Killed The Radio Star,” two acoustic songs and kind of weird lo-fi production. What drove you to make this transition from the self-titled album?
Johnson: We were a lot more influenced by Guided By Voices in the way it was set up, especially the sequencing. We had different stuff, like certain songs recorded at home and some at the studio. It was more all over the place and less cohesive. It was definitely more of a just straightforward pop influence. We weren’t going for all energy all the time; it’s more melodic. We already made a super energetic record. This is for a different mood — to sit down and take in, not like a freak-out-and-destroy-your-room kind of record.

DT: If you could time travel your whole band to a different period to play the same music with the same instruments, what time period would you go to and why?
Johnson: I’d go back as far as I could! I’d probably go back to Roman times, and we’d be the only electric band and live like gods, you know? Before I time traveled, I’d do a lot of research and become an electrician and then learn how to harness electricity and then I’d plug in Marshall fucking amps and a PA and show the Romans punk. We’d either be gods or be killed.