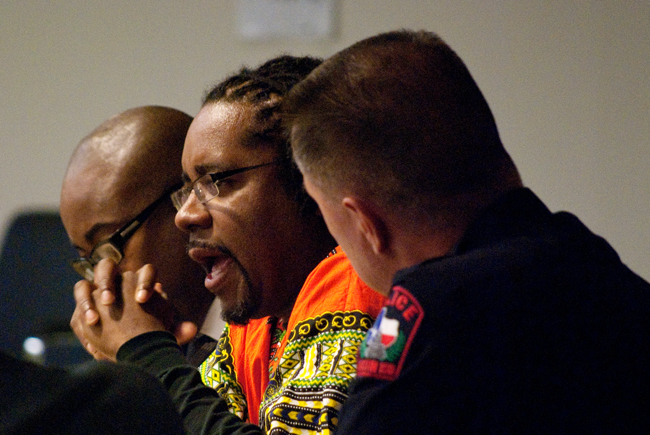 College of Education Professor Dr. Richard J. Reddick addresses the issue of education inequality and how it relates to incarceration Tuesday evening at the UTC.

Minority students in low income communities are more likely to end up in a prison cell than in a college dorm, according to a panel hosted by Longhorn Teach for America Tuesday evening.

Panelists sought to identify factors contributing to educational inequality and rates of incarceration in America, specifically with respect to low-income minority students.

Leonard Moore, associate vice president of the Division of Diversity and Community Engagement, said any effort seeking to alleviate the problem of education and incarceration of minorities must include the importance of family structure in the development of low-income youth.

“No matter what we do with a young man, at some point he’s got to go home,” Moore said. “And what we’ve found is if there’s not a positive male role model there, daddy’s not there, much of what you put into the child gets out of him by 9:00 that night.”

The panel also included Chris Evoy, Austin ISD police captain, and Richard Reddick, assistant professor of education. Evoy spoke of AISD’s attempts at decriminalization in schools where police seek to educate first rather than write a citation or make an arrest. Evoy emphasized the importance of taking a holistic approach when considering discipline problems with students.

“What is the root of the problem? Have we talked to this student? Part of decriminalization is finding out what the problem is,” Evoy said. “This isn’t a student that’s going to go away. He’s still in the classroom. If we take him to jail, he’s coming back. So we have to figure out what’s going on.”

The event was hosted by Longhorn Teach for America, an organization that supports Teach for America, a program in which recent college graduates teach for two years at schools in low-income communities. In 2012, 61 UT college graduates were admitted to the program, tying with Georgetown University as the 10th highest contributor among all universities.

Melissa Dunn, government and supply chain management senior and campus campaign coordinator for Longhorn Teach for America, said she hoped the panel would shed light on the pervasive nature of education inequality in America.

“We want people to understand that the education gaps don’t end at the classroom,” Dunn said. “The effects permeate the education, economic and justice systems in this country.”

Reddick reflected on his own experiences as a teacher and offered advice to students pursuing a teaching profession.