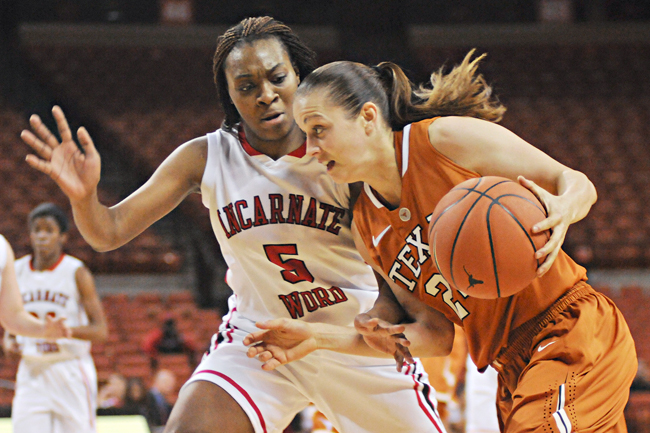 Tuesday night brought smiles to the Longhorns’ faces at the Frank Erwin Center as the women’s basketball team dominated the University of the Incarnate Word.

The exhibition game had Texas written all over it as it took down the Cardinals 77-33 in the late night game. The Longhorns played two strong halves as they more than doubled the score of Incarnate Word.

Texas started out strong as it went on a 13-0 run. After the first half, it held its opponent to just 25 while scoring 41.

In the second half, the Texas defense again outshined the Cardinals as it held them to just eight points while the team was able to score 36 points in the last 20 minutes.

Junior guard Chassidy Fussell did a little bit of everything for the Longhorns in their first game of the season. The Tennessee native tallied 18 points while also recording five assists and seven rebounds.

Head coach Karen Aston was all business in her first game back with the Longhorns, rarely sitting down as her team controlled the game. Despite only shooting two three-pointers and turning the ball over 25 times, Aston was pleased with her team’s overall performance.

“I thought they shared the ball well,” Aston said. “If we don’t turn it over, I think we’ll see more assists. We shot the ball really well.”

While this was only an exhibition game, the Longhorns put a lot of energy into the game and pushed the tempo, a style Aston will look to use heavily in her first season here at Texas.

“I’m really big with starting games with high energy, and I was very pleased with how we started the game,” Aston said.

The Longhorns now get back to practice and look ahead to a tough game against St. John’s in the WBI Tip Off Classic. With one game under its belt, the team can go into its season with more confidence and awareness of how they need to play to avenge last season’s disappointing end.