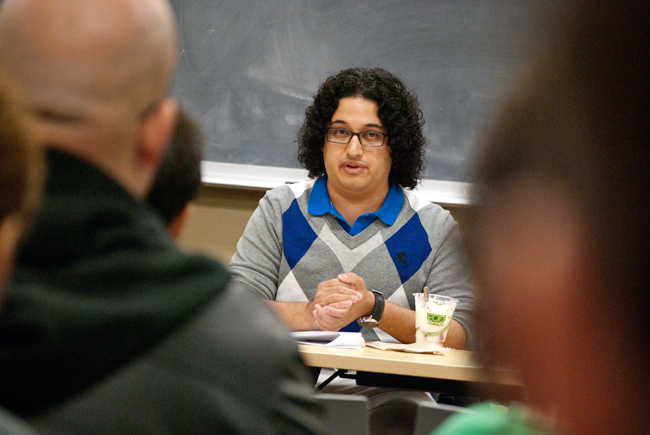 During a panel discussion hosted by the Department of Sociology on Tuesday afternoon, panel member Juan Portillo, a PhD student in sociology, discusses the issue of race, gender, and class-related incidents that have occurred on campus. " />

During a panel discussion hosted by the Department of Sociology on Tuesday afternoon, panel member Juan Portillo, a PhD student in sociology, discusses the issue of race, gender, and class-related incidents that have occurred on campus.

Students have the power to organize themselves to make the University a more accepting place, student and faculty panelists said at a discussion Tuesday.

During the event hosted by the Department of Sociology, panelists said the University’s social structure and learning environment marginalizes minority students.

Juan Portillo, a sociology graduate student who led the panel, said recent reports of bleach balloons being thrown in West Campus and race-themed parties hosted by students are examples of struggles minority students face. Portillo said the University’s structure caters to white male students and faculty, which creates tension on campus. Portillo said students are discriminated against by their race, gender and sexuality or a combination of these different identities.

Portillo said everyday interactions that question someone’s presence on campus can cause students to feel estranged. He said a white-centric curriculum can also disconnect minority students from their classmates and professors.

“If you point out someone’s accent or question their citizenship status or you joke about a woman’s intelligence, this may not sound to some people as great grievances, but they add up and they take a huge toll on the students,” Portillo said.

Rocio Villalobos, panelist and Multicultural Engagement Center program coordinator, said the nature of the University may cause minority students to struggle finding acceptance on campus and force them to create new student organizations to meet their needs.

“Many of these efforts to make the institution not only a more welcoming space but a place that is truly supportive have been led by students of color,” Villalobos said. “Students have a long history of pushing for changes on campus for their needs and interests and concerns to be taken seriously in a way that acknowledges that they exist at the intersection of these multiple identities.”

Panelist Marianna Anaya, an ethnic studies and radio-television-film junior, said she could not find an organization on campus that offered her support as both a Chicana and lesbian. Anaya co-founded La Colectiva Femenil, which she said aims to support feminine queer-identified students through discussions of identity to encourage empowerment.

“There was no space for us in Latino groups or queer groups or in female-centered groups,” Anaya said. “There really wasn’t a place for this intersectionality to take place, so we made one. We were so frustrated, and there was really no other place to discuss these issues.”

Villalobos said La Colectiva Femenil is an example of how students can embrace their struggles to find a place of acceptance.

“We have to actively create opportunities to make these discussions more visible and public and stop silencing the ways in which we have been deeply wounded as a result of our existence at the intersection of these multiple identities,” Villalobos said.