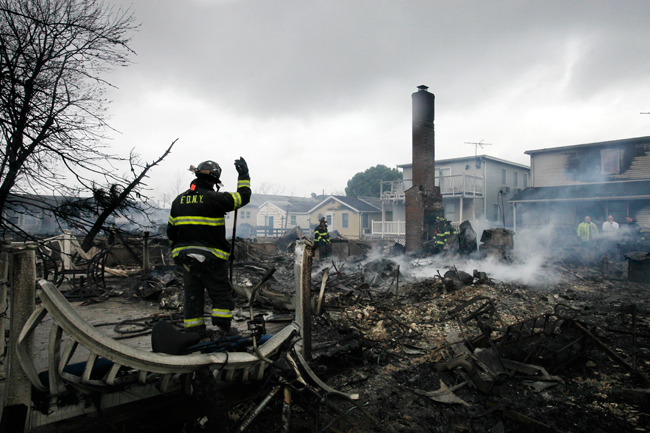 A firefighter surveys the smoldering ruins of a house in the Breezy Point section of New York, Tuesday. More than 50 homes were destroyed in a fire that swept through the oceanfront community during Super-storm Sandy. " />

A firefighter surveys the smoldering ruins of a house in the Breezy Point section of New York, Tuesday. More than 50 homes were destroyed in a fire that swept through the oceanfront community during Super-storm Sandy.

NEW YORK — Stripped of its bustle and mostly cut off from the world, New York was left wondering Tuesday when its particular way of life — carried by subway, lit by skyline and powered by 24-hour deli — would return.

Mayor Michael Bloomberg and the power company said it could be several days before the lights come on for hundreds of thousands of people plunged into darkness by what was once Hurricane Sandy.

And Bloomberg said it could be four or five days before the subway, which suffered the worst damage in its 108-year history, is running again. All 10 of the tunnels that carry New Yorkers under the East River were flooded.

Sandy killed 10 people in New York City. The dead included two who drowned in a home and one who was in bed when a tree fell on an apartment, the mayor said. A 23-year-old woman died after stepping into a puddle near a live electrical wire.

“This was a devastating storm, maybe the worst that we have ever experienced,” Bloomberg said.

For the 8 million people who live here, the city was a different place one day after the storm.

In normal times, rituals bring a sense of order to the chaos of life in the nation’s largest city: Stop at Starbucks on the morning walk with the dog, drop the kids off at P.S. 39, grab a bagel.

On Tuesday, those rituals were suspended, with little indication when they would come back. Schools were shut for a second day and were closed Wednesday, too.

Some bridges into the city reopened at midday, but service on the three commuter railroads that run between the city and its suburbs was still suspended.

The New York Stock Exchange was closed for a second day, the first time that has happened because of weather since the 19th century, but said it would reopen on Wednesday.

Swaths of the city were not so lucky. Consolidated Edison, the power company, said it would be four days before the last of the 337,000 customers in Manhattan and Brooklyn who lost power have electricity again.

For the Bronx, Queens, Staten Island and Westchester County, with 442,000 outages, it could take a week, Con Ed said. Floodwater led to explosions that disabled a power substation on Monday night, contributing to the outages.

A fire destroyed as many as 100 houses in a flooded beachfront neighborhood in Queens. Firefighters said the water was chest-high on the street and they had to use a boat to make rescues.

The landscape of the city changed in a matter of hours.

The mayor said: “We will get through the days ahead by doing what we always do in tough times — by standing together, shoulder to shoulder, ready to help a neighbor, comfort a stranger and get the city we love back on its feet.”