Texas extends its season with big win over Oklahoma 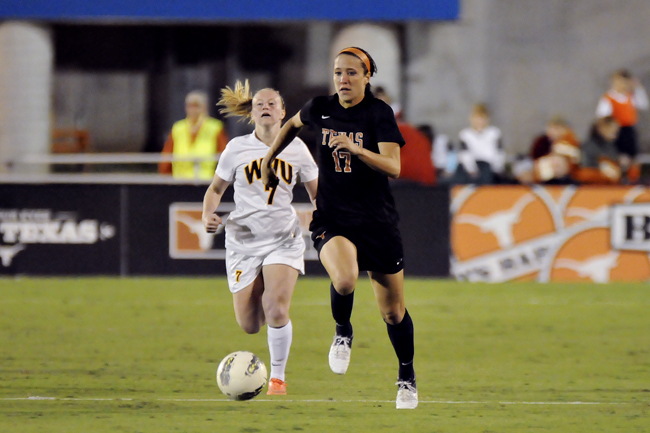 Texas and Oklahoma played a close game that was decided by a single goal in September. This time, Wednesday afternoon, the Longhorns came out and made a statement that they are a serious contender for the Big 12 crown with a 3-0 victory over the Sooners.

The three goals were the product of the coming-out-party for freshman Kelsey Shimmick, who scored two goals in the game. She almost completed the hat trick, but the Sooners’ attempts to clear her first shot of the game went in for an own goal.

Less than three minutes later, Chantale Campbell set up Shimmick 14 yards out for another goal to give the Longhorns a 2-0 lead in the 28th minute. Texas nearly tripled the number of shots of the Sooners and was able to get a lot more pressure on the Oklahoma defense. Only two Oklahoma shots were on goal, and Abby Smith made saves on both of them. The shutout was Smith’s sixth of the season, matching a Texas freshman record.

Both teams exchanged shots throughout the game before Texas put the game away in the 81st minute. Emily Campbell delivered a pass to Shimmick around midfield that turned into a breakaway. Shimmick got past the defense and put the ball past Oklahoma keeper Kelsey Devonshire.

Shimmick’s two-goal game is the fourth by a Texas player in the Big 12 Tournament and the second by a freshman.

Texas will face the winner of the match between No. 1-seeded West Virginia and No. 8 TCU on Friday afternoon in the semifinals.

Printed on Thursday, November 1, 2012 as: Texas dominates, advances to semis