Ash’s career depends on how he finishes this season 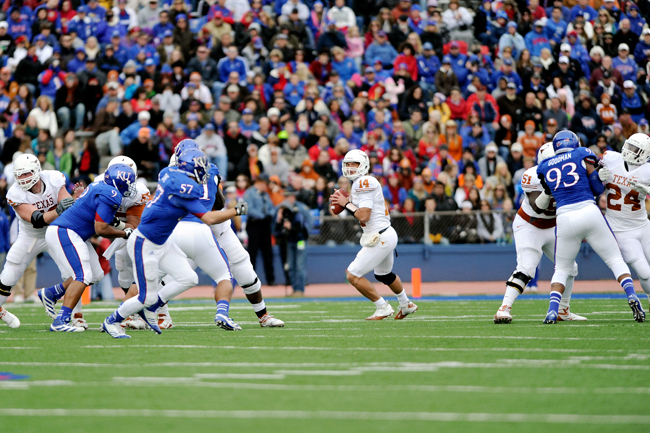 Quarterback David Ash looks to throw against Kansas last weekend, Oct. 27. Thanks to difficulty first against Oklahoma and then against Kansas, Ash must have a solid game to stay ahead of Case McCoy on the depth chart.

Garrett Gilbert would have been a senior at Texas this year. Case McCoy is a junior. Both stood above David Ash in age and experience at one point.

Let’s go out on a limb and say that Ash didn’t expect to play such a big role so early in his career at Texas.

But now he’s in this role. After Saturday, for how much longer is the question.

With the exceptions of the games against Oklahoma and Kansas, he has shown improvement and maturity. But last year he was plagued with inconsistency and threw twice as many interceptions as touchdowns and completed 57 percent of his passes.

“You never want to look at the past because nothing you’ve done in the past affects what you’re going to do in the present,” Ash said before the Oklahoma State game. “You just have to take it one play at a time and concentrate on what you’re doing and try to do your job the best you can.”

Now, it’s time for him to prove himself as McCoy is breathing down his neck.

Maybe he didn’t expect to be the starter so early in his career, but the next four games will either solidify or unravel his claim of that coveted spot atop of the depth chart. His coaches seem to have a lot of faith in him and kept him as the starter this week even though McCoy saved Texas from a loss to Kansas.

Ash will be taking on Texas Tech’s stout defense, and after the Red Raiders, Texas will face Iowa State, TCU and Kansas State.  While Texas’ toughest stretch was its first three Big 12 games of the season, the next four will not be easy. A lot rides on these next four games for Ash.

“It’s about being a winner and having a winner’s habits, mentality and everything,” Ash said.

Ash has shown his toughness this season, as he has bounced back from a left wrist injury that he incurred during Texas’ loss to Oklahoma. After a tough outing against the Sooners, he led the Longhorns to 56 points with 274 passing yards against Baylor. He also brought back the Longhorns for a last minute win over Oklahoma State.

Now, he’ll need to bounce back again after being benched.

“He’s shown me that he can lead this team and be tough,” wide receiver Mike Davis said. “He’s smarter. He just showed me what kind of leader he really is.”

Davis saw Ash working hard in the weight room and knew his improvement this year was inevitable.

When sharing the starting spot with McCoy, Ash struggled. Whether it was a confidence issue, inexperience or an inability to find rhythm while switching in and out, he doesn’t want to be in a two-quarterback system again.

Ash said different quarterbacks take different amounts of time to adjust to new teams and systems. Other than the Oklahoma and Kansas nightmares, Ash appears to have finally found his way around the offense.

“There’s been some quarterbacks who can come in as a true freshman and get a pretty good handle on things. As a quarterback, as players, as people in general, we’re creatures of habit,” Ash said. “So whenever you’re coming into a new place, a new situation, learning a new offense, playing a different kind of game, you have to create some new habits. Sometimes you have some really bad ones you got to get out of and form new ones. Sometimes it takes a while.”

It took a little while for Ash. His growth has been obvious this year. But as he’s quick to point out, this season is far from over.