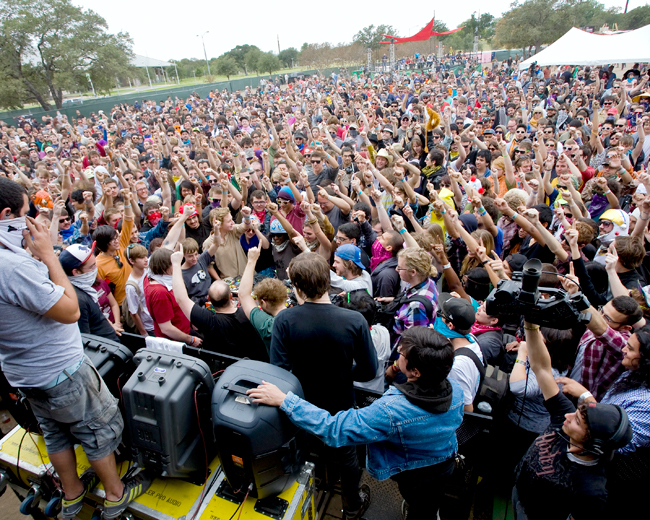 Enthusiastic fans gather close to a stage at Fun Fun Fun Fest 2011. Crowds at FFF are smaller than those at ACL, allowing for a more comfortable festival experience. Photo courtesty of Transmission Events

A comprehensive lineup of musicians and comedians will assemble at the seventh annual Fun Fun Fun Fest this weekend at Auditorium Shores.

FFFFest’s four stages will run from noon to 10 p.m. all three days. Big acts like Girl Talk, Run-DMC and De La Soul will be supplemented by smaller, underground acts like Against Me! and The Sword. Actor and comic David Cross will be performing stand-up comedy at the Yellow Stage. The Daily Texan Life & Arts staff picked three their top acts for each day.

FRIDAY:
Converge, Black Stage, 5:15 p.m.
Easily one of the most important recent acts in hardcore, Converge is the genre’s pinnacle of technicality. Drummer Ben Koller’s complex polyrhythms keep the listener on edge while virtuosic Kurt Ballou sounds like he’s playing two guitars at once. A slew of new material from recently released All We Love We Leave Behind is to be expected, along with an exhibition of their reputation for wild live performances.

Superchunk, Orange Stage, 6:50 p.m.
The dream of the ‘90s is alive with Superchunk. Formed in 1989, the band is an example of tastefully done indie-meets-punk rock music. Superchunk has been releasing albums consistently since its formation and its members are veterans when it comes to giving electric live performances. If you’re lucky, you might be treated to the band’s alternative take on “Say My Name,” the hit by Destiny’s Child.

Run-DMC, Orange Stage, 8:35 p.m.
Sometimes reasons for seeing a band are irrelevant, and this is one of those times. Run-DMC was arguably one of the first popular hip-hop groups in history and helped the genre break into the mainstream. The original trio was disbanded in 2002 when DJ Jason “Jam Master Jay” Mizell was murdered. This will be the first time that MCs Run and DMC have performed together under the Run-DMC name post-breakup.

SATURDAY:
Power Trip, Black Stage, 12:50 p.m.
The most violent thrash metal band that comes to mind is Power Trip. Coming out of Dallas, the band draws influence from classic bands like Metallica and Pantera while adding their own touch of Southern rock. Their ultra-fast chugging patterns and angry lyrics will surely provide a cathartic outlet for angry audience members.

Real Estate, Orange Stage, 6:05 p.m.
If you find yourself in need of a break from thrashing about at the Black Stage, make your way to Real Estate’s subdued, surfer-alt rock set. This band of Jersey boys was formed in 2009 and has released two albums, Real Estate and Days. Real Estate has been climbing the festival circuit for the past few years and is playing an evening set at a big stage for their Fun Fun Fun Fest debut.

SUNDAY:
Balmorhea, Orange Stage, 1 p.m.
Daylight savings time kicks into effect at 2 a.m. Sunday and with that extra hour of sleep, consider waking up early to make it to the Balmorhea set. Formed in 2006 in Austin, this mellow instrumental band is like the kid sister to fellow Austin band Explosions in the Sky, although less “explosive.” For those who wish to ease their way into the final day of the festival.

Between The Buried And Me, Black Stage, 6:05 p.m.
The members of Between The Buried And Me are simply too talented to be human beings. The five alleged humans interject sections of obscure genres like polka and bluegrass in between their mainstays of death and progressive metal to create epic, genre-transcending compositions that can last more than 10 minutes each.

Printed on Friday, November 2, 2012 as: Diverse acts lined up, Run-DMC to reunite