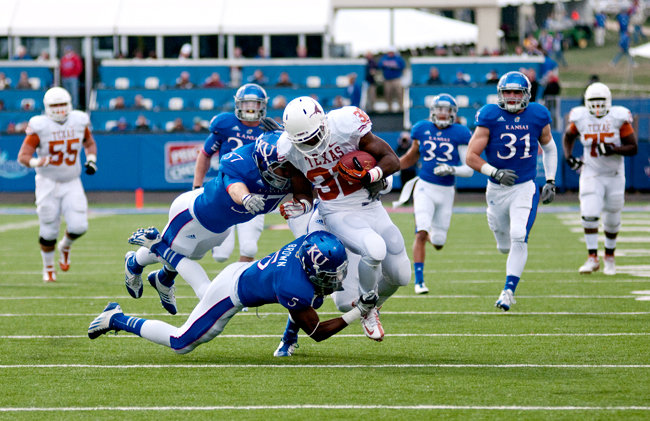 Jonathan Gray (32) is corraled by Kansas defenders during the Longhorn's 21-17 win over Kansas in Lawrence last weekend. Gray rushed for a career-high 111 yards on 18 carries.

Johnathan Gray didn’t grow up idolizing any halfback legends. Instead, he watched tape of his dad.

That’s not to say his dad, James, was a slouch himself. James Gray was a local high school legend halfback, just like Johnathan, and went on to become the second-leading rusher in Texas Tech history.

However, despite their shared DNA, the pair are quite different. Johnathan may have taken pieces of his dad’s game and incorporated them into his own, but the way they approach each rushing attempt is about as similar as the job of the kicker and an offensive lineman.

Still, it can’t be denied that James had a heavy influence on Johnathan’s ascent to the top of the Texas running back heap. First at Aledo High School where he shattered the record books and became the No. 1 tailback recruit in the class of 2012. Now less than a year later, he’s atop the depth chart at Texas and will make his first career start when the Longhorns roll into Lubbock this Saturday.

Gray’s elevation has been extraordinarily quick for a freshman who was fourth on the depth chart only eight weeks ago, and even Johnathan admits he’s surprised to be a starter so quickly.

However, head coach Mack Brown had nothing but a laundry list of positive things to say about his newly-minted 18-year-old starter who’s already rushed for 435 yards on only 81 carries.

“Johnathan is really tough,” Brown said. “He is so mature for a freshman. He’s got good ball security. He can catch. He’s learning his pass protections better.”

Johnathan may be making his first start, but he’ll have a tough time convincing his parents to put on even a fraction of burnt orange in the stands.

Both his mom and dad attended Texas Tech, and there has been quite a bit of back-and-forth family ribbing between the three leading up to the game. Though Johnathan says he’ll wait until after the final gun to really lay it on thick.

“I’m going to Texas, they went to Tech,” Johnathan Gray said. “It’s kind of a rivalry in the house. They talk smack. I’ll just be quiet and wait till the results after the game.”

Still, despite the friendly family rivalry, Johnathan admits his dad only wants what’s best for him. This explains why, even early on, James tried to shy away from molding Johnathan directly in his shadow. The two have completely different builds and personalities on the field, and James wanted Johnathan to become his own man.

“My dad said ‘You’re your own man, and I can only lead you so far and the rest you have to take on your own.’” Johnathan Gray said. “He wants me to be better than what he was in college.”

But it goes farther than that. James never made it in the NFL and he wants his son to reach that level. It won’t be easy, but Johnathan takes the first big step towards that goal this weekend with his first start.