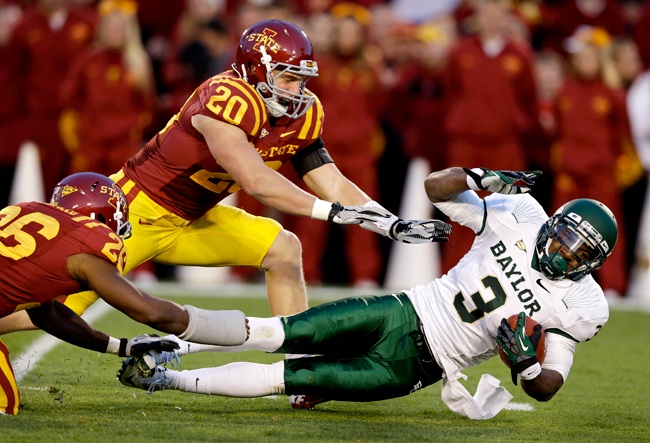 Baylor wide receiver Lanear Sampson is tackled by Iowa State defensive back Deon Broomfield and linebacker Jake Knott (20) after making a reception during the first half of a game, Saturday, Oct. 27 in Ames, Iowa. Iowa State won 35-21.

With college football heading into November, the race is heating up for the top spot. Oklahoma’s loss to Notre Dame last weekend leaves Kansas State the lone Big 12 team left to have a realistic shot at the national championship game. Let’s take a look at some of the conference notes heading into the weekend.

• Iowa State’s senior linebacker Jake Knott will miss the rest of the season after injuring his shoulder versus Oklahoma State. Knott is the leading tackler for the Cyclones this season, with 79 total tackles, and sixth all-time at ISU (347). Knott’s original surgery date was rescheduled back a week, allowing Knott to play one final game as a Cyclone. Without the help of painkillers, Knott tallied 11 tackles and a forced fumble as ISU defeated Baylor, 35-21.

• After suffering an injury in the second half versus Oklahoma State last weekend TCU quarterback Trevone Boykin is healthy and will start against West Virginia on Saturday. Horned Frogs’ defensive end Stansly Maponga will start as well, after missing the past two games with a foot injury. Maponga has 12 tackles and a forced fumble this season.

• Is Oklahoma State sophomore Josh Stewart the next great Cowboys receiver? Stewart, who has been thrust into a bigger role in the offense after injuries to more veteran receivers, has not disappointed. The sophomore is the teams’ leading receiver with 48 catches for 574 yards and three touchdowns. Stewart also averages seven catches per game, which ranks him 18th in the nation in that respective category.

• After ranking in the top five in total defense to start the season, including holding offensive juggernaut, West Virginia to 14 points, Texas Tech has struggled stopping teams the past two weeks. The Red Raiders, despite overcoming TCU, gave up 53 points to the Horned Frogs a couple of weekends ago and a week later gave up 55 to Kansas State. To add insult to injury, the Wildcats scored on seven straight possessions. The Red Raiders have dropped to No. 12 in total defense giving up exactly 300 yards per game.

• Kansas running back, James Sims is on a rushing tear, surpassing the 100-yard mark in each of the past five games. With Baylor and the last ranked defense on the docket next, it looks like the streak will go to six. Sims rushed for 176 yards versus the Longhorns last weekend.

• Saturday will be the first matchup between the first-year Big 12 members, TCU and West Virginia. TCU boasts the 23rd ranked defense in the country, allowing 333 yards per game and surely will test the West Virginia offense, which has stalled out the past two games. Both teams are coming off two consecutive losses and after entering the season as two of the conference favorites, will be teeing off in the conference consolation bracket.