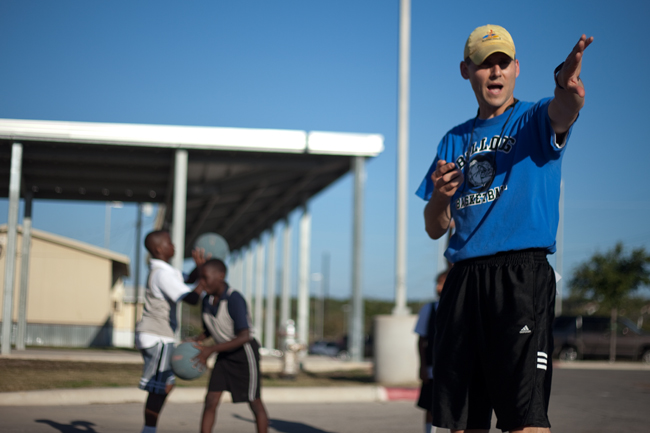 Dave Edwards coaches the Bulldogs, a basketball team in East Austin. The goal of the Bulldogs program is to support economically disadvanaged children and enstill values.

Beyond box scores, beyond accolades and beyond championships, sports have the ability to bring people from all backgrounds together to focus on a common goal. More than anything else, sports have the power to evoke unrealized strength from people and change them for the better.

Dave Edwards recognized this as a boy in Erie, Pa., when he helped his father coach soccer teams composed largely of inner city and international kids. Edwards took this experience to heart and in 2007 founded Bulldog Basketball, a program for fourth and fifth graders at Overton Elementary School, located in East Austin and where he coaches physical education. Now entering its sixth season, the program focuses on helping economically disadvantaged children, many of whom have behavioral issues in school, learn life skills to help them succeed as adults.

“This is a pretty tough area of Austin, as tough as Austin gets,” Edwards said. “Many kids are unmotivated and struggle with behavior, struggle with academics.”

Although Bulldog Basketball has been successful on the court, winning the city championship in 2009 and again in 2011, its overall goal is to instill in kids a mindset to help them overcome their difficult situations and give them a way to channel their energy in a positive direction.

In addition to discipline, Edwards pointed to solidarity as a key to Bulldog Basketball.

“In our program we say five fingers, one fist,” Edwards said. “Individually, you’re easily broken. Life can break you down. But man, when you come together with others and you come together as a fist, you can’t break a fist.”

With teamwork and perseverance at its core, Edwards said basketball helps kids enjoy life to its fullest.

“Basketball’s something that you can use not only to get a college education, but also to get wonderful experiences out of life that equate to hopefully a more successful life,” Edwards said.

In order to keep the program running smoothly, Edwards relies on a board composed of close friends and colleagues, including his wife, Brittany.

“A huge reason Bulldog Basketball was founded was to provide these kids with a framework for success, both on and off the court,” Brittany Edwards said. “We purposefully choose kids that are struggling academically because they need the extra tutoring and extra focus.”

Another program supporter is Brian Hill, who received his master’s in educational administration from UT in August. An assistant coach and board member from 2008 to 2011, Hill believes Bulldog Basketball is vital because it gives children opportunities to overcome their difficult positions in life.

“Most kids aren’t going to go on to play in the NBA, so the fact that he’s teaching them skills that will allow them to acquire jobs and start a family and become a viable member of society is more important,” Hill said.

Although he is no longer involved in the program, Hill said he learned a major life lesson during his time there.

“Bulldog Basketball showed me the difference you can make in a kid’s life, no matter what background they’re coming from,” Hill said. “They don’t just learn how to shoot a free throw or a layup. They’re learning to contribute to society and to go after any dreams they have.”

Jose Martinez Sr., whose son is entering his second year in the program, echoed Hill’s praise of the program. Martinez said his son’s demeanor has changed drastically since he joined the team.

Bulldog Basketball has also had a remarkable affect on Martinez as a father.

“Before Jose entered the program we didn’t spend much time together because I was always working and worrying about money,” Martinez said.

“Since then though, I’ve been able to spend more one-on-one time with him by playing basketball and doing things I normally wouldn’t have done. It has made me a better parent.”