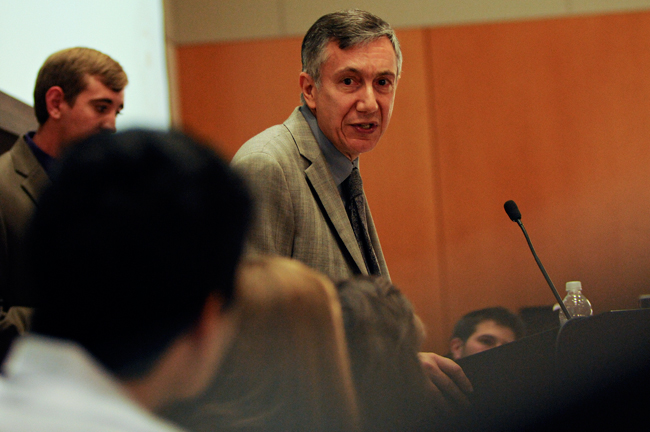 Beyond its partnership with a nonprofit offering innovative online classes, the UT System hopes to continue its growth in the world of digital and interactive education.

Steven Mintz, executive director of the Institute for Transformational Learning, spoke to the UT Senate’s general assembly Thursday evening, where he said it was important that UT lead the world in an innovative transition of higher education.

“If we do not do it, somebody else will and we probably won’t like what they do,” Mintz said.

Earlier in October, UT joined edX after a unanimous vote by the UT System Board of Regents. The nonprofit organization, which offers online education courses, was founded by Harvard University and the Massachusetts Institute of Technology last year. Since then, the University of California at Berkeley and the UT System have signed on to join edX.

The UT System pledged $10 million and four online courses to edX, but Mintz, who serves as the UT System’s chief edX liaison, said he wanted to see UT do more than provide those four courses online. Mintz said he wanted UT to continue providing more innovative, online classes for its students.

“Students who are in these large, pinch point, gateway, foundation courses are getting an OK experience, but they can get a better one in an interesting way,” Mintz said. “Let’s try to use some of our technologies to see if we can create something cool.”

Mintz said he wanted to emphasize that the idea of online courses was not being forced on faculty or students.

“In some places like California, there has been a lot of resistance to doing this,” Mintz said. “I think people are afraid that this isn’t about what is good for students, that it won’t be faculty driven and that it will come from up high in the administration. It won’t be that way here.”

“I want to find ways so students can participate in the creation of new online courses,” Mintz said. “We’re going to try and bring these courses into the 21st century.”

“New technologies are positively impacting how professors teach and how course content is delivered,” Cigarroa said in a statement earlier this month.

“The University of Texas System will help lead this revolution and fundamentally alter the direction of online education.”