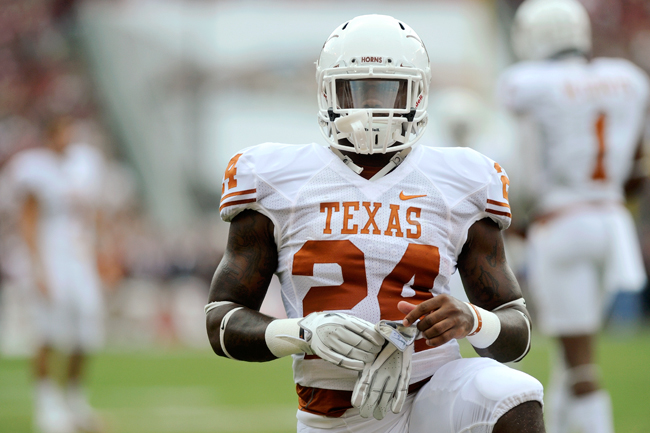 Joe Bergeron (pictured) rattled off 191 rushing yards and three touchdowns against the Red Raiders in Austin last year. If Texas is to win in Lubbock this time around it will need another big performance from Bergeron.

Despite an 11-3 career record against Texas Tech, Mack Brown has every reason to be scared on the trip to Lubbock this weekend.

Brown’s Longhorns are fresh off what would have been an exhilirating come-from-behind win over Kansas if it had not come against arguably the worst team in the nation. Texas somehow managed to let the Jayhawks run all over, around and through its defense — something that has become commonplace for opposing offenses as the season wanes. Brown was on the verge of his worst loss at Texas and was saved by the grace of Case McCoy.

Now faced with questions surrounding the quarterback position (again), the song remains the same for Texas according to Brown.

“There’s a lot of two-loss teams out there that are really, really good football teams,” Brown said. “Some are talked about as teams that could possibly win a national championship. We were sitting here last year at the same spot. We were 6-2 and didn’t finish well.”

And the Kool-Aid continues to be passed around. Brown has effectively brainwashed his team into believing they can still compete with the best teams in the nation. The past three seasons have shown that to be the farthest from the truth.

The Red Raiders have been slowly turning the corner from bottom feeder to conference contender under Tommy Tuberville, and in this his third year it seems as if his patience has finally paid off. At 6-2, Tech has played well both at home and on the road and its only two losses have come to the Big 12’s best in Oklahoma and Kansas State. Something big may be brewing in Lubbock, and it smells like defense. Tuberville has turned a perennial doormat into an aggressive squad that sits at No. 12 in the nation in total defense. The Red Raiders have always been able to put up points, but their defense was always lacking.

Despite its new-found defensive identity, Tech has given up the most touchdowns (24) out of any of the nation’s Top 15 overall defenses. The Red Raiders are giving up an average of 300 total yards which leaves the door just ajar enough for the Longhorns to make this game interesting.

For the most part offensive production hasn’t been a major concern for Texas. It’s been its much-maligned defense. It’s not even worth saying any one player or unit on the Longhorns’ defense is elite, or however you want to categorize greatness, because the numbers have proved that this defense has bent, broken and fallen apart at the seams. Texas Tech knows this and will be expected to have its way in finding more holes among the Longhorn defenders.

Given the recent nature of this rivalry it may be better to avoid looking at the total yardage given up by both teams after the game has ended. Although Tech’s defense is much-improved, there will be plenty of opportunities for the Longhorns to showcase their rushing attack and attempt to keep up with Seth Doege and his merry band of receivers.

The last time the Longhorns and Red Raiders met a season ago, Texas pummeled Tech 52-20. Joe Bergeron got loose to the tune of 191 yards rushing as well as three scores, and as a team Texas ran for 439 yards. Six total rushing touchdowns and four drives of 80 or more yards, all of which resulted in touchdowns, sealed the win for the Longhorns. The game was such a blowout that Darius White caught a 31-yard touchdown pass from Case McCoy in mop-up duty late in the game. It was only White’s sixth catch in two years at Texas, and his last as a Longhorn before transferring to Missouri. Maybe the most obscure statistic from that game was the fact that Ash completed just 4-of-7 passes for 125 yards and no touchdowns.

If Texas is to win again in Lubbock, a gameplan similar to last year’s may be the answer. Doege is going to find the endzone one way or another, but it is imperative that Texas keep him off the field by executing time-consuming drives that must end with some sort of score. If Ash proves ineffective once again, it shouldn’t take as long to get McCoy in the game. In spot-duty this year McCoy has shown to give the offense a spark when needed, and he deserves his shot, too. Texas could learn something from being more open to change at any position if the person assigned to a task isn’t getting the job done.

This game has all the makings of another classic and should give us all a better idea of where the Longhorns are headed under Brown.