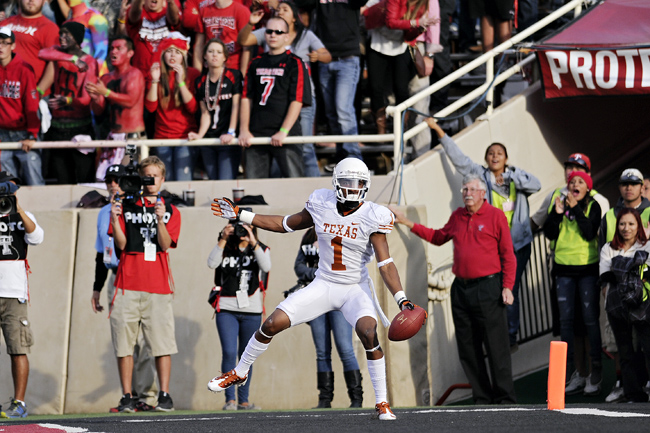 Mike Davis celebrates after one of his career-high two touchdown catches against Texas Tech. The sophomore wideout caught four passes for 165 yards, also a career high, in the nine-point triumph over the favored Red Raiders as the Longhorns improved to 7-2 on the year.

LUBBOCK — Mike Davis and David Ash had a connection Saturday that was nothing short of Davis’ middle name: magic.

The pair teamed up for a 165 yards and a pair of touchdowns on only four catches, including the game-winning score in the fourth quarter, leading the Longhorns to a 31-22 victory over Texas Tech.

“He was telling me before the plays ‘Throw it to me and it’s a touchdown.’ So I threw it to him and it was a touchdown,” Ash said.

The biggest of these connections came with 9:14 remaining in the fourth quarter. The Longhorns were driving and co-offensive coordinator Bryan Harsin decided to take a shot. Ash dropped back, looked right, but then came back to his left and let the ball fly toward the left corner of the end zone. The ball looked like it would come up short, but that’s when Davis made a play.

With his long strides, Davis pulled away from the Red Raiders corner and snagged the ball out of the air, inches out of the reach of the defender.

“Whenever the ball is in the air I always feel like I’m going to get it,” Davis said. “I was just like ‘It’s coming, time to make a play.’”

Davis’ catch was the final effort on the scoreboard for Texas, but it was special teams play that sealed the contest.

Immediately after the Davis grab, Texas Tech quarterback Seth Doege commanded the huddle and delivered perfectly-thrown crossing routes complemented with the occasional run. With the Red Raiders at the two-yard line, the Longhorns defense buckled down.

On first down, they were able to bat away a fade in the corner of the end zone. On second down, the defense was aided by a holding penalty that took away a touchdown. Then, Adrian Phillips delivered a huge open-field tackle on the six-yard line. On third down, Texas was able to put Doege under enough pressure to garner a poor throw.

The miss forced a field goal attempt, which would have made it a one-score game. But it was at that moment that Carrington Byndom burst around the edge and dived with outstretched fingers, right in front of the descending leg of the kicker.

Both connected, and the ball sputtered through the back of the end zone for a block.

“It was a game saver,” head coach Mack Brown said. “It really put the game out of reach, if we could make a couple of first downs at the end.”

That’s exactly what Texas did. The Longhorns wasted away the final five minutes with freshman Johnathan Gray, who was unstoppable on the final drive, gashing the Red Raiders defense between the tackles.

It capped off a huge day for Gray as he ran for 106 yards and had another 41 receiving yards — a spectacular all-around performance for a young back who was playing in his dad’s shadow. Gray’s father, James, is the second all-time leading rusher at Tech.

“He’s fast, he’s tough and he’s a real competitor,” Brown said. “He’s so mature for a freshman. I’m sure the whole family is proud of him today.”

Davis’ catch was the game winner, Byndom’s block was the momentum swinger and Gray’s performance sealed it. But it was the play of the defense that kept the game in reach.

The defense displayed a bend-but-not-break attitude at its finest. The Red Raiders were in Texas territory all day, but the Longhorns held the nations’ 12th highest scoring offense to only two touchdowns and a 4-of-14 mark on third downs.

“We just never gave up we knew we just needed to stop them and hold them to field goals,” safety Kenny Vaccaro said. “We were going to win.”

Printed on Monday, November 5, 2012 as: Davis magical in victory