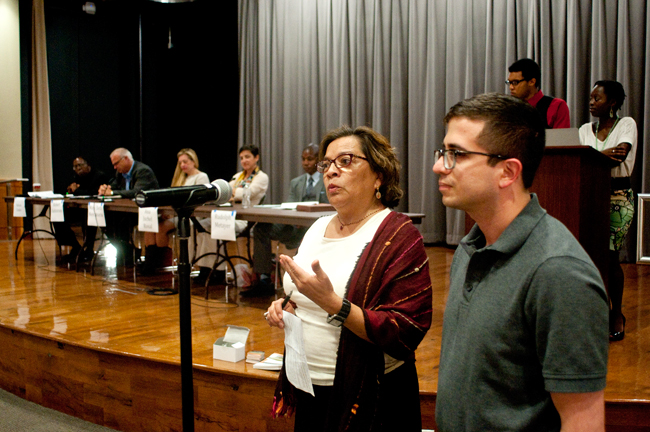 Hermelinda Zamarripa and LBJ first-year graduate student Julian Garza from the Office of the Police Monitor explain to students ways to file complaints about the misconducts of APD officers during a forum on racial inequities.

Students who are victims of racial discrimination have resources available on campus to help address the issue, according to speakers on a panel hosted by the Black Homecoming Planning Committee and the Black Graduate Student Association.

Timothy Bailey, executive co-chair of the Black Homecoming Planning Committee, said there is a lack of conversation between marginalized groups and the majority. To create dialogue, he said they have begun the “End to the Injustice” initiative to create a space where leaders from different organizations can educate each other on what is offensive or acceptable. Bailey has clear goals for the initiative.

“Create knowledge between the majority and minority to decrease the acts of discrimination,” Bailey said.

Stacey Jackson, secretary of the Black Graduate Student Association, said the goal is to educate students so they can become empowered.

“There is a system, and now that we know the information, we can hold the University accountable,” Jackson said.

Mary Beth Mercatoris, assistant dean of students, said every complaint that comes to the office is investigated to determine if the incident violates any University rules. She said the office uses an educational proactive approach and a reactive approach that includes disciplinary actions if a situation arises.

In 2011, UT created the Campus Climate Response Team. The team does not have the power to administer disciplinary actions, but offers services that help the affected individual, said Ana Ixchel Rosal, director of diversity and community engagement.

“Get support, then coordinate to get the best response to help the individual heal,” Rosal said.

Students that have experienced discrimination can file a report, Rosal said. She said the staff investigates the reports and helps direct the students through their procedural options, which may include emotional support or legal actions.

Robert Dahlstrom, chief of the UT Police Department, said if discrimination is illegal, students should contact the Austin Police Department or UTPD. He said West Campus is under APD jurisdiction, but UTPD does work closely with APD on all situations.

Dahlstrom also said that UTPD’s main goal is to protect the students, but it cannot do this if situations are not reported.

“I want to reiterate,” Dahlstrom said, “we need reports.”

Resources for students affected by discrimination are not limited to the 40 Acres. The city of Austin opened the Office of Police Monitor as a resource to aid individuals who have had a conflict with an Austin Police Department officer regarding the complaint procedure. On the first Monday of each month, there is a public meeting with a panel of citizens to hear grievances.