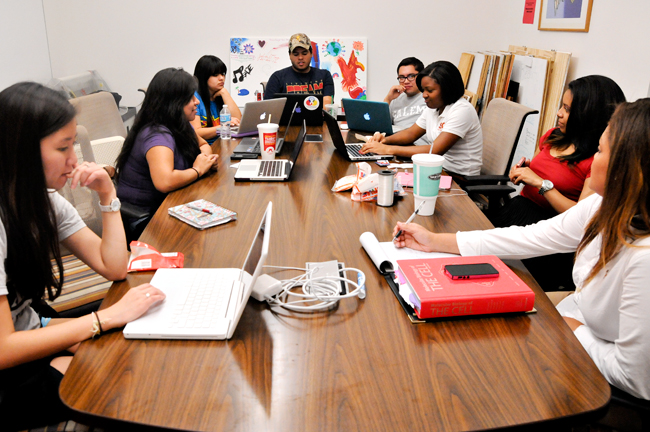 Student representatives from different campus-wide minority groups collaborate together Monday evening to finalize plans on the Decision 2012 election night watch party. While originally aiming to bridge different partisan groups, the representatives decided instead to create an environment for students of all cultures and political preferances to watch the election together.

Guevara wanted to put on an “epically huge” Election Night watch party, public relations senior Kelley said. Kelley liked the idea. She envisioned a screen in front of the Tower to broadcast election results and a party on the Main Mall in which all major campus organizations from every cultural and political group would take part.

The event, called Decision 2012, will take place Tuesday in the Student Activities Center Ballroom, but it will not be the campus-wide party that Guevara and Kelley originally imagined. When they approached partisan political groups like University Democrats and College Republicans, they found that those groups, like many others, wanted to watch the election individually at events that were openly partisan.

“It really turned into a minority-driven thing, and I think everyone’s happy with the way that it turned out,” Kelley said.

Although an election watch party certainly can’t ignore politics, the organizers of Decision 2012 have attempted to make the event engaging and celebratory rather than divisive. The event will feature three screens, two of which will show live election coverage. The central screen will show a live Twitter feed. Event attendees will be told a hash tag (tentatively #Decision2012UT) as they walk in the door and will be encouraged to tweet questions they have about the election or the election coverage. These questions will be answered via Twitter by the event’s organizers.

If attendees want to show their political affiliations, one wall will be covered with a large piece of butcher paper divided into sections for the Democratic, Republican, Libertarian and Green parties. Students may sign their name on the paper to show support for their party or submit an anonymous pre-cut “handprint” to be taped to the wall under their party’s name.

“Something I always wanted to do was blend the cultures here on campus,” Guevara said. “It’s a very minority-heavy event, but at the end of the day, this is the first event of its kind [at UT], at least since I’ve been here, and I’m going on my fifth year … but what we’re all hoping is that we’re kind of laying the foundation for more events like this, so you don’t just have to come together for the watch party, and it’s not just centered around minority groups. [The whole campus] can come together like this any time of the year.”