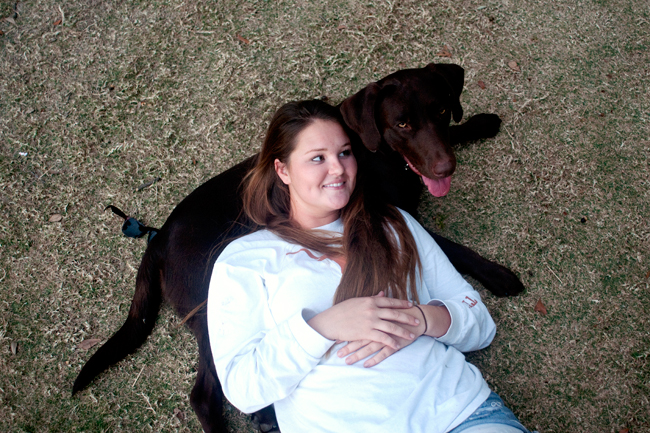 Charli Kilpatrick and her chocolate labrador Dudley became Internet celebrities after the government senior directed a video called “Ruff Dog Day.” The video, which has attracted over 1.4 million viewers so far, was created for a UT class focusing on the circulation of entertainment and people.

When the role of a UT student’s dog in her video “Ruff Dog Day” helped attract more than 1.4 million viewers, a communications professor found the perfect example of entertainment circulation at work.

Celebrity Culture, a class offered at UT, focuses on the circulation of entertainment and people, including celebrities and politicians who circulate as images that reappear on computer, television and cinema screens. Students in the class split into groups to create either a blog or YouTube video to attract as many hits or visitors as possible. The project did not focus on the development of the blog or video; instead, it focused on publicizing the project.

Kilpatrick said her job was to make the video while the other members worked to promote and circulate it. She said their group was hoping to get 1,000 views by December, but managed to pass that goal in a matter of hours. The group then sent the video to reddit.com, Comedy Central, “The Ellen DeGeneres Show” and other television shows that accept web videos

“Making the video was a fun experience, but the best part was the end effect,” Kilpatrick said. “It is enlightening to know that you can post something on the Internet and people from around the world will enjoy it.”

Kilpatrick said Dudley is a relaxed dog who happened to be tired on the day the filming took place. She said the video took about 30 minutes to film.

“I dipped his toothbrush into dog food in order to brush his teeth,” Kilpatrick said. “Dudley also went through about six sandwiches before I could get the right picture.”

Communication studies associate professor Joshua Gunn, who teaches the Celebrity Culture class, said publicity today has shifted to a logic of circulation, staying in the “public eye” and getting noticed. He said it is not the object itself that gains value in a culture, but whether or not the object is circulated and seen.

“The experiential takeaway for the students, when I’ve used this assignment in the past, is that it is hard work to promote something into circulation, however good or bad that something is,” Gunn said. “The assignment also illustrates, however, the sheer contingency of publicity, too — what we call, simply, ‘luck.’”

Latin American studies junior Matthew Flores said he was impressed by the clever idea of the video.