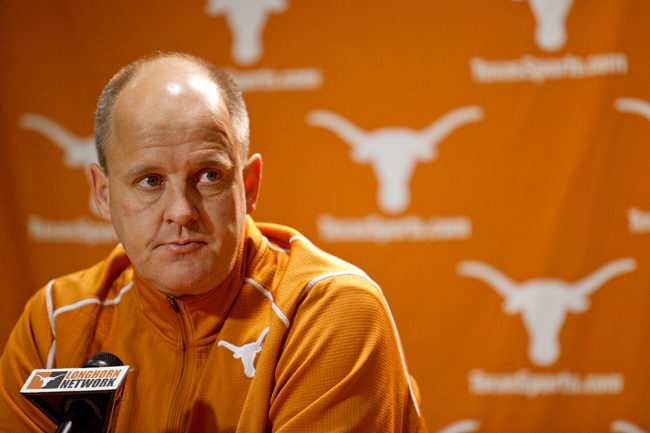 With the conclusion of October, the Longhorns are more than halfway through their season and have exhibited more balance and consistency than was seen in August. They are excited about the next step, likely earning home court advantage in the first few rounds of the NCAA tournament plus a possible trip to the Final Four in Kentucky later this year.

“We are excited,” Texas head coach Jerritt Elliott said Monday. “We are getting some great play out of a lot of our players and we are playing a lot steadier … we are getting a lot more balance.”

No. 7 Texas has a week off before facing No. 20 Kansas, second in the Big 12, Saturday on the road in Lawrence. The Longhorns’ impressive 20-3 season record and 12-0 conference mark only show a little of the inconsistency they struggled with at the start of the season. The Longhorns were plagued with high error counts and inconsistent play from their entire lineup.

In back-to-back losses to Penn State and Minnesota in September, high errors doomed the Longhorns. They racked up 17 and 23 errors in each game, respectively. Since then, the mistakes are down to much lower numbers on average.

Sophomore Haley Eckerman and junior Bailey Webster have been the backbone of Texas all season. Webster was named Big 12 Offensive Player of the Week on Monday after her effort against Kansas State.

Eckerman has won Big 12 Offensive Player of the Week four times this season and is in the running for National Player of the Year recognition.

Early on, the Longhorns were receiving excellent performances from their star players. However, they were inconsistent, which led to losses to talented opponents.

“The development of where Haley and Bailey have gone is critical,” Elliott said. “We are starting to get a lot of good play out of both of them on the same night; early on we weren’t getting that.”

Since then, they have won 14 straight matches in both sweeps and five-set matches. They are also finally receiving big numbers from their highly touted freshman class. Molly McCage, the No. 1 ranked freshman in the class of 2012, is finally living up to the hype she created when she stepped onto the 40 Acres.

“She’s done a phenomenal job and her numbers continue to go up,” Elliott said. “We kept her confidence going and now she’s getting to the point where she can take some big swings in critical situations.”   At the start of the season, McCage was rarely seen on the court and never played during crunch time. However, in the past few weeks she has graduated to a starting role as a middle blocker. McCage has put up two straight career highs with 10 kills in each of the last two matches and posted a combined hitting clip of .643 against TCU and Kansas State this past week. She was named Big 12 Rookie of the Week for her performance.

The Longhorns have managed to keep their national title hopes alive during the toughest part of the season.

“If you look around the country, almost everyone in the top ten lost,” Elliott said. “For us to be able to go three wins in such a short amount of time was very pleasing. It’s a critical time but it’s a good time for us.”