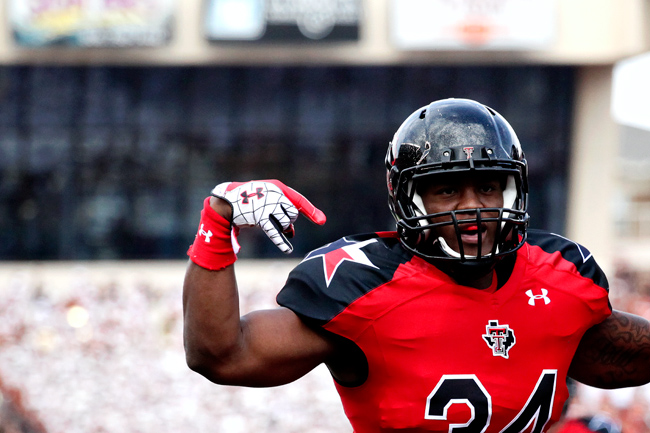 Texas Tech running back Kenny Williams celebrates his first quarter touchdown with a horns down sign. It is a sign that Mack Brown labeled on Monday as disrespectful and a double standard after Mike Davis was penalized for holstering guns at the Tech crowd.

The Texas Tech crowd was at its fiery best. On a cool November afternoon, fans screamed expletives, tossed tortillas at players and, of course, threw their horns down as a sign of disrespect.

Mike Davis had an answer for them.

Davis ran a beautiful post route over the middle of the field while easily separating from the Red Raider pursuit en route to a 75-yard touchdown. The junior wideout reached the end zone and instead of his usual “horns up” celebration or flip of the ball to the referee, Davis made a change. He faced the Texas Tech crowd and demonstratively holstered his guns in a sign of disrespect for the Red Raider symbol of guns up.

The demonstration cost him a 15-yard penalty and angered the Texas coaching staff. But Monday morning at his press conference, Mack Brown said it’s inconsistent that opponents can throw their horns down without penalty while other similar gestures are not allowed.

Horns down is an emblem seen consistently throughout Big 12 play. Players and opposing fans turn Texas’ symbol upside down as a sign of disrespect before, during and after games. Notably, Oklahoma quarterback Landry Jones laughed with his teammates while throwing his horns down after the team’s 63-21 victory over Texas at the Cotton Bowl. Although that’s far from the only example, Texas Tech players flashed the symbol on multiple occasions Saturday. Opposing coaches don’t seem to see the issue with horns down either.

“I’m not gonna walk around and do it, but I’m not going to stop our players,” Oklahoma defensive coordinator Mike Stoops said Monday.

It’s a sign Texas players and fans are used to, but that doesn’t make it any less derogatory. Still, Davis knows he went a little too far with his celebration, especially considering the referees had already warned him against it earlier in the game. But Davis still didn’t think he’d draw a flag.

“The refs were telling me not to do it again, and I did it again,” Davis said with a hint of a grin.

The penalty cost Texas valuable field position, which eventually led to a Red Raider field goal. This was an extraordinarily valuable three points in what was a one-possession game for most of the contest, which explains Brown’s in-your-face talk with Davis after the flag. It was a one-sided conversation with Brown doing all of the talking. And it didn’t take Davis long to sum up the contents of the conversation.

“They ripped me,” Davis said.

The message seemed to sink in. When Davis scored the game-winning touchdown later in the game, he didn’t holster any guns or raise any horns — he quietly handed the ball to the official.
Still, Davis didn’t believe that he would be penalized in the first place because he sees opponents putting the horns down all the time. It was a costly mistake, but a move, Brown said, the referees maybe shouldn’t have acted on.

Seeing horns down is commonplace across the Big 12, but if Davis’ case is any indication, guns down won’t be nearly as common any time soon. Brown may want a change, but that wouldn’t happen until the offseason at the earliest.

However, one thing is for sure — Davis won’t be pulling his guns out of his holsters for the rest of the year.

Printed on Tuesday, November 6, 2012 as: Horns down irks Brown