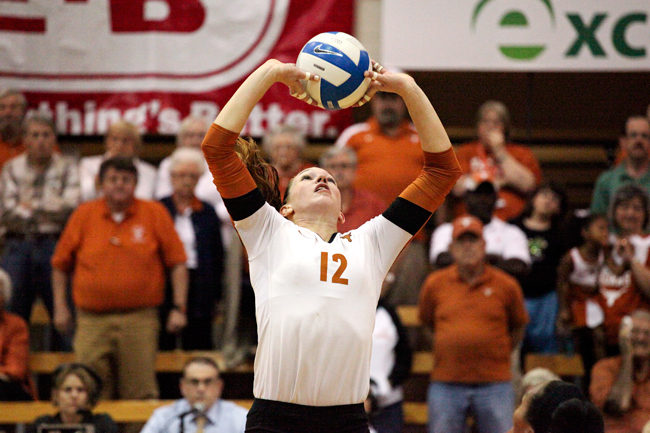 Hannah Allison is part of the No. 3 team in the nation.

In rare moments of spare time, Hannah Allison likes to pull out the pots and pans and bake desserts.

But don’t mistake her sweet tooth for a lack of vigor on the court.

“I just want to win,” Allison said with a smile. “I just wanted to come somewhere where I could win and help my team win. If there’s a goal, it’s to win as much as possible.”

That spoken determination is echoed in action each time Allison steps on the court. The junior setter began her Texas career as the No. 9 recruit in the nation. Since then, she’s posted 2,379 assists, moving into ninth place on UT’s career list for assists. Against Kansas State last week, she contributed 46 assists.

But for the Arkansas native, choosing Texas wasn’t an easy decision in a state full of Razorback fans.

“People in Arkansas are either Arkansas or Oklahoma fans,” she said. “They don’t like Texas. I had to get over that.”

“For me, Texas couldn’t be beat in all these different areas,” she said. “The academics are awesome, athletics are awesome. What you have at Texas you can’t find anywhere else.”

And despite her early uncertainty about the Lone Star State, Allison said she quickly grew accustomed to it.

“I like Texas,” she said. “It is like its own little country just like everyone says it is, but there are great people here and I’m glad I have that community here.”

“She started playing club volleyball when she was 13 or 14 and I was 12, and I did everything she did,” Allison said. “We both just fell in love with it.”

Three years later, Allison is part of the No. 3 team in the nation, leading the Big 12 and working toward a chance at a national title. The pressure that comes with it is a welcome push, Allison said.

In the locker room, Allison can be found quietly thinking about the game, no headphones needed.

“I don’t really listen to music before because it’s distracting to me and I start getting into the music,” she said. “I just have to be quiet and visualize the game to get myself ready.”

Allison credits her teammates with much of her success and also with making training time enjoyable and fun.

“I love the personalities on this team,” she said. “It makes it fun to come in the gym with people who are themselves and can bring that special energy. Everyone wants to win. It makes it really fun.”

Head coach Jerritt Elliott said one of the rewards he’s experienced as a coach has been to see Allison’s confidence develop over her time at UT thus far.

“Hannah’s very competitive and she works extremely hard and wants to win at all costs,” Elliott said. “She’s learning a lot about herself and becoming more patient with herself. She’s becoming more of a leader, taking some of that feedback and running with it, but she’s a lot more confident in terms of what she can do on the court.”