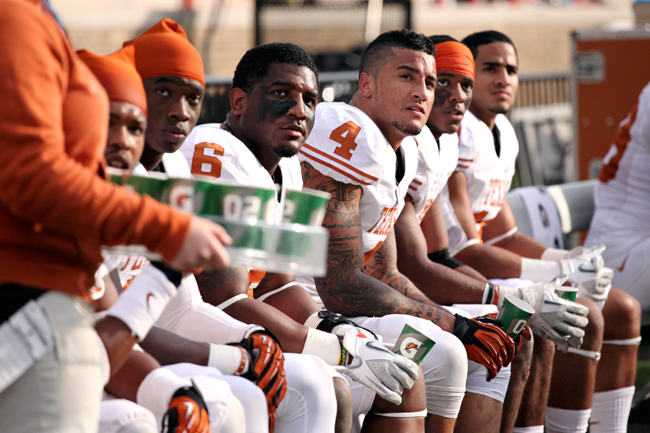 Members of the Texas defense sit on the sideline after Texas Tech’s Eric Stephens scored on a 10-yard pass from Seth Doege in the third quarter.

Following the Red River Rivalry a few weeks ago, a game in which Texas surrendered almost 700 yards of offense to the Sooners, the Longhorns were on pace to become the worst defense, statistically speaking, in Texas history. Fast-forward three weeks and the Longhorns, who are coming off three straight victories, are still struggling to shut down offenses. The Longhorns continue to allow 446.6 yards per game, a number that would rank worst in program history by 45 yards a game.

With so much defensive talent on the field, including seven returning starters from a unit that ranked No. 11 in total defense in 2011, it seems almost impossible that this Texas defense would be the worst in school history. Numbers will tell you it is, but numbers are just that, numbers. Statistics don’t contain context, such as the talent of the Longhorns’ opponent, or having to match up against a potential Heisman Trophy winner. This season the Longhorn defense has faced immense offensive talent in over half its games, including the No. 1 and 2 total offenses in Baylor and Oklahoma State, respectively. Week after week the defense is forced to buckle up and hold on against the most offensively productive conference in college football.

Back in 1997, the defense allowed 33.3 points per game, the most in school history. The Longhorns also only faced one ranked team the entire season in Texas A&M, a 27-16 loss. Texas compiled a (4-7) record, including a 66-3 loss to UCLA in Austin, a game that saw the Bruins rack up five touchdowns through the air and three on the ground. The poor season prompted the firing of head coach John Mackovic and marked the beginning of the Mack Brown era.

Five years ago, in 2007, the Longhorns were experimenting with defensive coordinators after Gene Chizik took the head coaching job at Iowa State. During the regular season, Texas saw two ranked opponents, allowing 20.5 points a game between the two matchups. Against unranked foes, the Longhorns gave up 25.4 points a contest, just about 2.5 more than this season’s squad. Like this year’s team, the 2007 Texas team was aided by the offense’s ability to outscore teams.

It would be unfair to call this year’s defense the worst in Texas history, even if the statistics lean toward that reasoning. The amount of talent the Longhorns have faced, injuries and the Longhorns’ overall record go to show just how talented the defensive unit actually is. Texas has many opportunities to squash its defensive woes as the season wears on.