Kreayshawn on her own without White Girl Mob, still bad bitchin’ 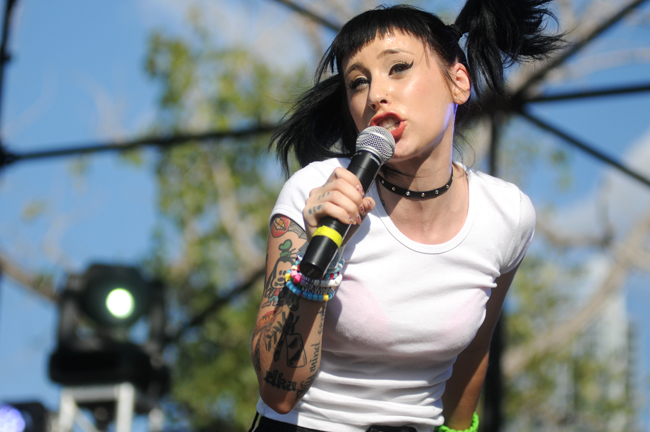 Natassia Zolot, known as female rapper Kreayshawn, is the human equivalent of Jigglypuff. Like her Pokémon counterpart, Kreayshawn is animated and eccentric. She demands attention whenever performing and her pipsqueak vocal delivery is the gospel to hipster hip-hop fans and young girls whose wardrobe probably comes from Hot Topic. Kreayshawn stopped in Austin for Fun Fun Fun Fest. The rapper spoke with The Daily Texan about getting into the music industry, buying a dog and her latest album, Somethin ‘Bout Kreay.

The Daily Texan: The album spans through a bunch of sounds and influences. What influenced you to make such a diverse album?
Kreayshawn: I listen to a bunch of genres of music, so I made this idea where every song on the album would sound like a different genre of music. They still maintain a Bay Area feel, but each song is different from one another.

DT: There is a genuineness to you that I think fans greatly appreciate. From personal songs such as “BFF,” to your USTREAM videos where you hang with Andy Milonakis, you allow people to see you for who you are. Do you feel that has contributed to your success?
Kreayshawn: I started out on the Internet and always put random shit on there, and I kind of think people have grown with me since then. Like, they see old videos of me when I used to live in Oakland, playing my grandfather’s organ and freestyling. Those same people are the ones supporting me and buying my album. So it’s interesting that people get to grow with me, and that helps me not change, you know? It’s not like I can recreate myself and be a completely different person. Sometimes people will be like, “Oh Kreayshawn, you’ve changed.” Of course I have changed. I was 18 when some of my videos went online. Now I’m 23: I’m smarter, more sophisticated, classy [laughs].

DT: One of the biggest discussions surrounding your latest album has been its record sales. But what I find interesting is that you’re still doing sold-out performances, which in this day and age in music may be more important than actual record sales. Is there anything you would like to clear up to those still giving you crap about it?
Kreayshawn: It’s not true that those were the worst sales. It was just a thing that one blog said. Second of all, it was only for sale at Hot Topic, and the albums sold out on the second day. Once they sold out, they did not restock the album and still have not [laughs]. Also, I’m not Rihanna. What’s the point of harassing me because I did not sell over a million records? I do not give a shit about making money for the label at all. I think people are afraid to ask me that question. I’m proud of myself for even putting out an album. Everybody is entering the [music] game right now, so it’s a lot harder to get picked up and get noticed. It’s hard out here for a pimp.

DT: Prior to moving to Los Angeles, you attended Berkeley Digital Film Institute. If any, what was one of the most important lessons you took from going there?
Kreayshawn: The most important thing I learned about was editing. I love editing videos. I prefer that over directing or producing videos. Also, taking film seriously made me want to take everything I was doing seriously. That was around the same time I started taking music seriously.

DT: The White Girl Mob disbanded earlier this year, but I was glad to see everyone in the music video for “Go Hard.” Will there ever be a White Girl Mob super release or tour?
Kreayshawn: I would love for that to happen, but everyone is just doing their own thing at the moment. Like, Lil’ Debbie is rapping now, and Vanessa [V-Nasty] is doing a lot of collaborations on her own. I’m down, but we’ll have to wait and see.

DT: What are your plans once tour is done?
Kreayshawn: I want to get a puppy. I want to get a French Bulldog, but I feel like an asshole buying a dog from a breeder. So I may just get a really cute puppy that I know I’ll be in love with.